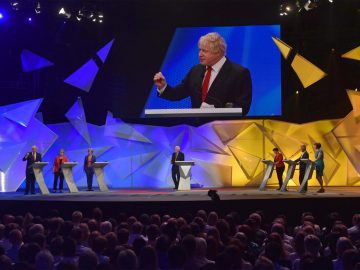 ‘The IN campaign had nothing positive to contribute tonight – just like they’ve failed to make a positive contribution during the whole campaign. They’ve lost the economic argument, they don’t want to spend the £350 million we send to Brussels every week on our priorities and can’t explain how we can ever control immigration from inside the EU. The couldn’t even be honest about how many laws in this country come from Brussels. The public will have a choice on Thursday, they can choose project fear and vote IN or they can chose project hope and take back control of their money and their borders. A Vote to Leave on Thursday is a vote for democracy.’

The Government gave up its veto over the next Treaty as part of the renegotiation.

Before the deal, Government Ministers made clear their consent to the next EU Treaty was the price for other member states agreeing to their renegotiation.

George Osborne said: ‘So let me be candid: there is a deal to be done and we can work together. Rather than stand in your way, or veto the Treaty amendments required, we, in Britain, can support you in the Eurozone make the lasting changes that you need to see strengthen the euro. In return, you can help us make the changes we need to safeguard the interests of those economies who are not in the Eurozone’.

David Cameron has said ‘we will not stand in the way of those developments, as long as we can be sure that there are mechanisms in place to ensure that our own interests are fully protected’. He believes this happened during his renegotiation.

David Cameron’s renegotiation agreement (which he claims is ‘legally binding and irreversible’) states that: ‘Member States not participating in the further deepening of the economic and monetary union will not create obstacles to but facilitate such further deepening’. It also obliges the UK to ‘refrain from measures which could jeopardise the attainment of the objectives of economic and monetary union.’. This means the UK is committing to support the planned new EU Treaty.

House of Commons Library research shows 61% of legislation comes from the EU.

Research by the House of Commons Library shows that in 2013, 61.2% of legislation was made by Brussels.

The CBI has admitted ‘over 50% of all government legislation originat[es] in Brussels’.

The CBI has said: ‘It is calculated that 70% of all new legislation relevant to business is now European rather than national in origin’.

Nick Clegg has admitted: ‘half of all new legislation now enacted in the UK begins in Brussels’.

Chuka Ummuna has said: ‘EU legislation… accounts for around half of all new regulation’.

The new EU Treaty will transfer major powers to the EU institutions from the British Parliament and courts.

An EU intelligence agency: In November, Dimitris Avramopoulos, the European Commissioner for Migration called for ‘the creation of a European Ιntelligence Agency’.

An EU army: In March last year, the President of the European Commission, Jean-Claude Juncker announced that he wanted to see the introduction of a European Army ‘to show that we are serious’.

Taking control of our NHS: Last February, European Commissioner for Health, Vytenis Andriukaitis, called to ‘change the European Union treaties in the future’ to allow the EU to take control of public health, including over alcohol. He has said ‘I can’t imagine a more economically effective possibility than to manage health issues at EU level’.

Introducing a new ‘pillar of social rights’: The European Commission has called for the ‘development of a European pillar of social rights’, stating ‘the Commission will pursue two complementary work strands: firstly, modernising and addressing the gaps in existing social policy legislation to take account of today’s work environment and to ensure that new models of work maintain a fair balance in the relationship between employers and workers’. The Commission suggests areas such as wages, union rights, pensions and access to social services could form part of the ‘pillar’. This could mean the UK’s more generous social protections are weakened by EU harmonisation.

The EU has stopped us removing dangerous individuals from the UK.

Terrorists. In 2015, the Special Immigration Appeals Commission ruled the UK could not exclude the French national ZZ from the UK because of EU law, despite the fact that he was a suspected terrorist. The Commission concluded that: ‘We are confident that the Appellant was actively involved in the GIA [Algerian Armed Islamic Group], and was so involved well into 1996. He had broad contacts with GIA extremists in Europe. His accounts as to his trips to Europe are untrue. We conclude that his trips to the Continent were as a GIA activist’.

Murderers. In 1995, Learco Chindamo, who is an Italian citizen, murdered the headteacher Philip Lawrence who went to help a 13-year-old boy who was being attacked. He was sentenced to life imprisonment in 1996. In 2007, Mr Justice Collins, sitting in the Asylum and Immigration Tribunal, ruled that removing Chindamo would be ‘disproportionate’ under EU law. David Cameron said that Tribunal’s decision ‘flies in the face of common sense. It is a shining example of what is going wrong in our country. He is someone who has been found guilty of murder and should be deported back to his country… What about the rights of Mrs Lawrence or the victim?’. Cameron said: ‘This does seem to be complete madness’.

Rapists. Mircea Gheorghiu, a Romanian national, entered the UK without leave in January 2007. In November 2007, he was convicted of driving a motor vehicle with excess alcohol, fined and disqualified from driving for 20 months. It later emerged that he had ‘a criminal record in Romania. In 1990 he was convicted of the offence of rape and sentenced to 6 years imprisonment. Between 2001 and March 2002 he was convicted on three occasions of forestry offences, cutting timber without a licence, and received custodial sentences on the last two occasions.’ The Secretary of State removed him from the UK in March 2015. Nonetheless, on 18 November 2015, Mr Justice Blake, sitting in the Upper Tribunal, decided this was unlawful under EU law, ruling Gheorghiu must be ‘reunited with his family as quickly as possible’ and that he was ‘entitled to a permanent residence on his return and the residence card issued to him will reflect that’.

Turkey and four other countries are joining the EU. This is being accelerated with unanimous support. Talks could begin the day after the referendum.

The accession process is being accelerated. In a press release issued on 15 June, the European Commission has announced that ‘The Commission tabled the Draft Common Position on Chapter 33 (financial and budgetary provisions) in the Council on 29 April, enabling the Council to decide on the opening of this Chapter by end of June. In addition, preparatory work continues at an accelerated pace to make progress on five Chapters’.

There is unanimous support in the EU for the quickening pace of Turkish accession. On 18 March 2016, the European Council unanimously agreed that the EU should ‘re-energise the accession process’ and that Turkish acceleration should be ‘accelerated’.

David Cameron strongly supports this. In 2010, Cameron said he was ‘angry’ at the slow pace of Turkish accession, that he was the ‘strongest possible advocate for EU membership’ for Turkey, and that ‘I want us to pave the road from Ankara to Brussels’. In 2014, he said that: ‘In terms of Turkish membership of the EU, I very much support that. That’s a longstanding position of British foreign policy which I support’.

The UK is paying £2 billion to help Turkey, Albania, Macedonia, Montenegro and Serbia to join the EU. Turkey alone is set to receive over £1 billion of UK funds to help prepare it for membership.

The UK has gone further than EU law on workers’ rights. Further harmonisation of social legislation poses a threat to the UK’s more generous protections.

The minimum wage, which was introduced in 1998, had nothing to do with the EU.

The Wilson Government passed the Equal Pay Act 1970 before it entered the then European Economic Community in 1973. The Labour Government passed the Sex Discrimination Act 1975, before the first EU Directive on the topic was adopted. There is no need to be in the EU to ensure equal pay for equal work.

The Employment Protection Act 1975 provided that a woman who was dismissed on the grounds of pregnancy was to be treated as unfairly dismissed. This was adopted long before the Pregnant Workers Directive.

The UK has been more generous than EU law on paid holidays, with 5.6 weeks entitlement each year, rather than the four contained in EU law.

UK legislation also gives women the right to receive 90% of their salary during the first six weeks of leave. EU law only requires that the rate of pay be equivalent to statutory sick pay in this period. This is £88.45 per week.

The UK had legislation against discrimination on grounds of race long before the EU did.

High Court Judge Sir Rabinder Singh has said: ‘The Race Relations Act 1976 [which consolidated the 1960s legislation] was perhaps one of the strongest pieces of legislation of its kind in the world and certainly in Europe. It long predated legislation against racial discrimination in EU law’.