Armed with his hook hands the crazed Islamic hate preacher Abu Hamza has turned his attentions from wishing death on all Westerners to cross-stitching and making colourful jumpers for the prison inmates as well as staff.

“He’s really good you know. Last week he made me a union jack jumper because it was getting rather nippy in my cell after the warden turned off the central heating. We call him Captain Hook, well he rustled an extra large sweater for me in less than a day,” said a chuffed National Front skinhead, Reggie Boots, 45, who is in prison for racial violence offences.

It seems that Hamza is the toast of the Protected Block where the VIP prisoners are kept.

“He also knitted for me a tea cozy so I can have a cuppa in me cell when I feel like it. He even made Jimmy Knuckles over here a woolly hat to keep his bonce warm during the cold winter days and nights. He’s a real godsend I tell you. He’s like a bloody machine he is, never seen anything like it. He made some of the boys carpets to put in their cells although one of the carpets had a picture of the twin towers up in flames. Still it’s better than the concrete floor innit?” Mr Boots added. 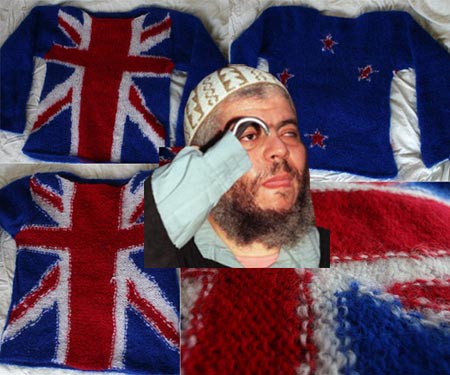 Wardens for were at first cautious to the Islamic hate-preachers requests for woollen yarn and other knitting paraphernalia but once he knitted them all unique jumpers they were all too keen to let his hook hands do more sterling work for them.

“It’s the only way we can stop him spitting and clawing everything in sight. Just hand him some wool and he’s as happy as chips he is,” said one of the warders looking after the hate-preacher.