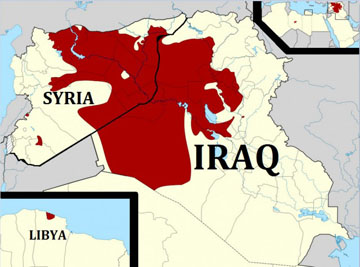 Even though the bombs have been raining on their territory and they have lost some ground in Iraq, the ISIS Islamic creed still lives on, and it is their puritan Sunni pseudo Wahabi spirit that endures every day making a mockery of the bombing parties spending millions on destroying empty buildings.

“It is assumed they receive prior intelligence and warning before any bomb is dropped by the Americans, not so much the Russians who are bombing civilian targets indiscriminately. ISIS have a vast network of tunnels where they congregate in safety and they are highly mobile. It is only a matter of time before they wipe out the Kurd threat in the region, as there are many forces which want that particular group cleaned out and erased,” a reporter on the ground revealed.

Despite the huge and expensive bombing effort by many different nations over the past year, ISIS have actually gained ground in Libya and Africa, as well as Yemen and other parts of the middle East. This sure fire steadfastness under massive adversity is a very fruitful recruitment tool for the group because it proves to many that the enduring flame of the single idea is cast in invincible diamond encrusted stone.