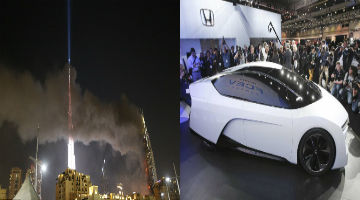 Just as the Twin Towers were symbolic of the end of North American strength where Boaz and Jachin were destroyed, so too the symbol of the single burning tower on New Year’s Eve 2015 represents the death of oil, and the ushering in of the New World. The single tower burning is symbolic of change, the devil will bring this already existing change whether the current regime like it or not.

Where Justice and Mercy were destroyed on 911, the New Year 2016 will represent the final destruction of oil and the beginning of the end for the house of Saud  and other oil states.

In what was meant to be an OPEC attack on shale in America, the engineered reduction of the price of oil is being turned around by the West upon the outdated Saudi kingdom itself and its many arms including the United Arab Emirates, no longer united.

The only difference between the Saudi state and the Islamic State is one is recognised internationally and the other is not. Otherwise, these two entities conduct exactly the same rituals to keep order in their own eyes.

With the advent of self driving electric vehicles and technology increases in fuel cells and green fuels, there is already a Western move away from oil.

Lest we forget the weakening of the bear, as Russia’s economy has lost so much with the collapse of the oil price and sanctions, it stands to lose a lot more in the years to come as its already whittled down economy spirals even lower. No oil revenue, no money, the bear will falter eventually succumbing to paralysis.

The play is for the ultimate prize, Iran, U.A.E., Egypt, Saudi Arabia, Syria and Russia with China on the sidelines for now and N. Korea as the Joker in the pack.

To usher in the New World, we must first see the destruction and ultimate change of the Old World.