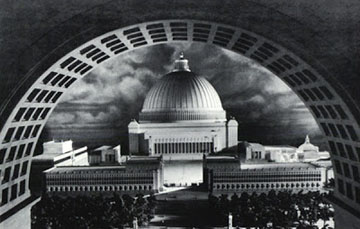 A group of historians aligned with the Institute of Historical Analysis, have posited that Hitler, although made out to be a monomaniacal monster was only trying to preserve his vision of what he saw as purity, yes, it was a rather naive vision, but it was also honourable and virtuous.

Hitler knew about the future horrors awaiting the world if he did not act, and he justified his own horrific actions by citing the very future he was trying to thwart.

It is quite ironic that the world after Hitler’s death did not cease its horrors, under Stalin 20 million people were brutally murdered and he was supposedly on the winning side, watched by the West and unpunished for brutality exceeding Hitler.

The world today is a living nightmare that Hitler and his cohorts fought with all their might against, for the ones in charge now are the ones no one is allowed to even mention or criticise.

Hitler tried to do the honourable thing but he was manipulated as much as any other person during his short reign, especially those who funded him, like the Brown Brothers Harriman through Prescott Bush and Fritz Thyssen as well as an assortment of other bankers.

Nothing can justify the horrors of the concentration camps churning out the ashes of the poor souls caught up in the Reich machine of death but the Nazis justified their clinical purge as much as those civilians who turned a blind eye to the terror. They believed, they had a plan, and they meticulously sought to carry out their mission to thwart the future horror materialising by somehow committing horrific acts themselves.

What of the Fourth Reich? Its incarnation is an economic one in Europe called the EU today, led by the new Germany, a socialist Marxist entity that now encompasses the whole globe under different regimes but its octopus grip extends far and wide, its tentacles delving into all crevices, nooks and crannies, never letting go and squeezing hard when needed.

The Germanic people today have been forbidden from even mentioning his name in public, but forced abstinence makes the heart grow fonder; within the core of Germany is a devout love for Hitler, and this will never be snuffed out.

If Hitler were to suddenly appear in the Welthauptstadt today he would be greeted by millions of Germans because he will always be their true father, to lead them from the jackals, vultures and wolves at their doors now. “I offer you struggle, danger and death,” he would say, and they would all fall at his feet.

Hitler was the monster as the West makes him out to be but to fight monsters you have to be one yourself; after all, the United States soon after the war, took all of Hitler’s scientists and great minds incorporating them into the American empire, he was a human like any other person, and his vision of the future is now confirmed to have been correct. He was right to fight to try and stop what would happen, instead he lost, and all the horrors he foresaw did materialise.

The outcome without Hitler has been worse, and the world today is in a permanent state of terror compounded with corruption, evil and pestilence at every level, this is what Hitler was fighting against.