Visitors to Britain are being advised to bring their own stab vests or purchase them when they get here so that they can enjoy their trip without being fatally stabbed.

With every day bringing another batch of brutal stabbings by feral hooded teens high on skunk weed and crack, there seems to be no respite to the deluge of knife madness that is gripping Britain.

Consulates across the world are advising their citizens to only travel to the UK if it is really necessary and if they do travel to “bring a kevlar stab and bullet proof vest”.

Travellers to Britain have also had another major setback, they cannot get travel insurance as no company is willing to sell cover for the UK.

UK citizens are not allowed to defend themselves if they are confronted by teenage killers brandishing knives and guns and are regularly arrested and charged if they dare to use self defence.

“The police in the UK do not carry guns and under health and safety rulings have been ordered to run away if confronted by criminals and children carrying knives or guns. Therefore, it is not advisable to ask for help from the UK police because they have less power than the criminals. Some police officers are trained in firearm use but they are only mobilised as a last resort after the stabbing or violent slashing has taken place,” John Simpson a guide for the British Board of Tourism revealed. 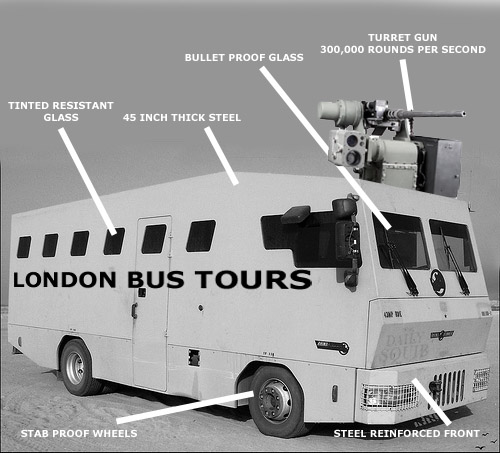 London Bus Tours, the premier tourist bus company in England, have taken the recent violent developments in England as a chance to unveil the new armoured tourist buses that have state of the art defensive capabilities ensuring all visitors are not violently murdered during the tour of the city.

The armoured tourist buses come replete with gun turrets as standard on the top deck and will travel around the UK’s cities with an armed escort.