The pictures
tell a thousand stories, and seem to implicate the two Democrat
senators of colluding in more ways than one. You only have to look at
the wistful look of love blossoming when Hillary gazes into Barack’s
eyes and the subtle smiles the two have for each other.

Was it all a game? The in-fighting for the primaries looked so
realistic, yet looking at these two now you would think they had
been lovers for years. The two are spending increasingly long
hours together on Barack’s election tour bus planning the Democratic
campaign against John McCain. 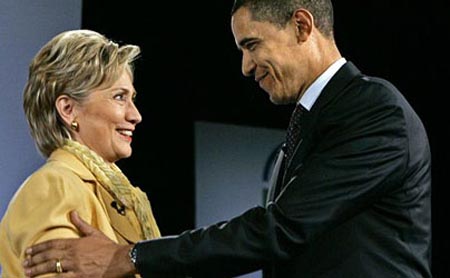 Yesterday at a rally in Milwaukee Hillary gently brushed her
hand across Barack’s thigh whilst he looked at her with a longing that
betrayed the fire burning in his loins.

A Washington Post reporter was
shocked to see the blatant disregard for the cameras or anyone else for
that matter: “Nothing else seemed to matter for these two. It was as if
they were in a sea alone and did not care even though the sea is full
of sharks, if you know what I mean,” Barbara Schlieissinger wrote in her
weekly column. 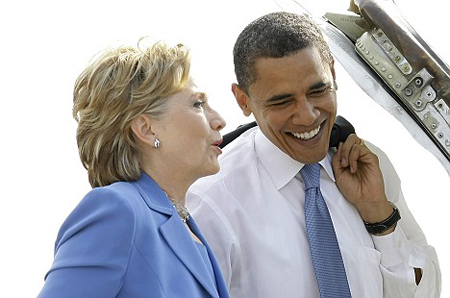 “Hillary had not had sex for decades but Obama has rekindled the fire
in her soul. She is a new woman. I’ve seen her blushing and glowing
with joy after her tour bus liaisons. She is flushed and ready to sing
to the crowds like a woman possessed,” Alan Huffington a reporter for
Unities local TV station WMUR9 exclaimed.

Obama’s
election tour bus is sometimes seen rocking in the evenings after
everyone else has gone home. Maybe this is because of Obama’s gruelling
exercise regime that he has been ordered to undergo.

Indeed,
love seems to have some boundaries and their collective spouses. Bill
and Michelle seem to be locked out in the winter blizzards of
exclusion. Bill, who is too busy ‘balls-deep’ amongst the mountain of
political groupies that follow his every move, is not bothered by his
wife’s affections for Barack. He simply turns a blind eye as she has
done for him for many years. In fact, Bill is happy that his wife is
finally off his back and she is free to roam free amongst the wolves so
to speak. 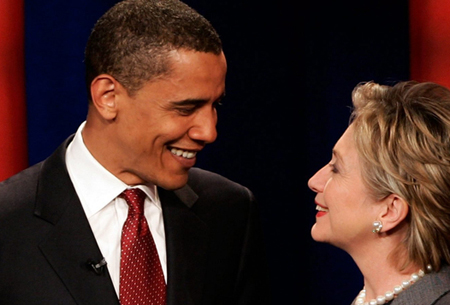 Michelle Obama is a different story altogether and
does not hold the nonchalance of Bill Clinton. Her fits of rage are
legendary and she is such a control freak that she even ensures what
style underpants Barack wears every day as well as what he is allowed
to do or say when he comes home every night.

Obama campaign staffers have witnessed
Michelle’s fiery temper towards him as she slaps his head on the
election tour bus when he does not get a question right during
interview rehearsals.

“I’ve seen her go up to Obama and spank
his head like it was going out of fashion, but he just takes it when
she does it in front of all the staffers and campaigners. It can be
disconcerting, to say the least. One time he got a question wrong while we were
rehearsing and she came up to him and kicked him in the groin. It was
shameful to watch,” Jenny Hatskins, an Obama campaigner, told Fox News.

Barack Obama has had enough of his domineering wife and may have defected for this very reason. 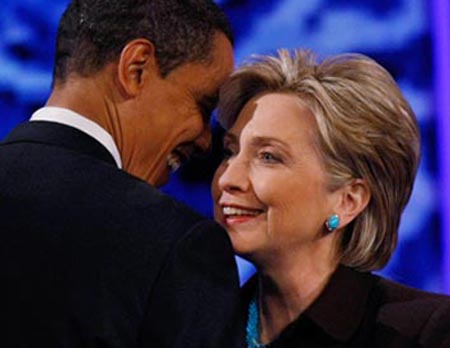 The
United States may for the first time in its short history have a
President and Vice-President team that conduct business from bed. That
would be a truly momentous story for the historians to write about in
the future.