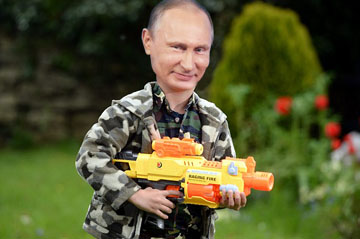 I only say this because I’d like President Putin to understand that I am offering this insight with the best possible intentions in mind. We, the height-challenged persons, need to watch out for each other. And, although for the past several years Mr. Putin has been the perfect incarnation of virility and power—shirtless photos, tiny submarine submersions, and well-photographed exercise routine speak for themselves—the three strategies I am about to offer will boost his popularity in the West while solving important world problems along the way.

My first suggestion has to do with the contraband food Mr. Putin’s henchmen have been destroying. When they drive a bulldozer over dairy, they render useless a substance that helps other people survive. Take cheese, for example. Why not let it sit out on a hot parking lot for a week or two after confiscating it? Then Russia could ship it to ISIS as the donation to the group’s efforts to obliterate the West. Think of how many innocent lives could be saved when ISIS fighters fall ill with food poisoning? Especially since, when it comes to poisonings, Mr. Putin’s record counts no equals. The number of brownie points he’d accumulate with this action would definitely make up for the Crimea debacle.

Capitalizing on his superb shooting skills is another opportunity President Putin is wasting. We all remember how, without batting an eye, he tranquillized that Siberian Tiger. We also remember Cecil, the lion that’s now more famous than Aslan. Since Mr. Putin is obviously just as big a fan of the wild life as he is of dispensing with people who cross him, why not focus his attention on those big game hunters. Take them down, one by one. Kind of like he’s done with Anna Politkovskaya, Alexander Litvinenko, and Alexander Perepilichnyy. The conservationists will sing him praises while booking holidays in Crimea.

Finally, Mr. Putin’s KGB background could be very useful in helping America put an end to what’s become a very long and tedious joke. I am speaking, of course, of Donald Trump. Why not dig something up on him–something that would disgust even those Americans who accidentally ingested a ‘love-Trump’ potion instead of Viagra? If President Putin takes him down, he’ll most likely drive Trump out of business and can then buy his real estate at rock bottom prices. All that Olympic construction in Sochi must have been tiring so why not appropriate properties in New York, Las Vegas, and Mumbai with much less effort? Associating your name with a struggling peninsula is one thing—putting it on a few tall buildings is completely another.

Don’t forget to buy a copy of Who is Mr. Plutin?