For a political leader who has rivalled Gordon Brown’s slippery nosedive in the opinion polls in the past year, president George W Bush looked remarkably untroubled by self-doubt as he crossed Europe last week.

The focus back home has shifted to the battle between Barack Obama and John McCain to salvage something out of the carnage and economic turmoil Bush has left behind. But Bush, on his last European tour as American President, is determined to justify the mass killing spree his foreign policy has adopted around the world and especially in the Middle East.

At street level, the president’s visit to Slovenia, Germany, Italy, France and now Britain has sometimes had an almost surreal quality. The war president has calmly spoken of his decisions over the years to kill and murder as many Arabs and Muslims as he can possibly manage. He has spoken of his joy at occupying Arab territory permanently and using up as much of their natural resources whilst systematically poisoning their ‘untermensch’ populations with depleted uranium. 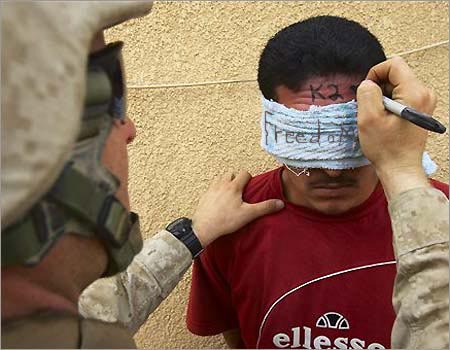 On the road to Fiumicino airport in Rome, where as in other capitals on his itinerary the police had far outnumbered any demonstrators, one taxi driver remarked: ‘Bush is a stone-cold killer and murderer, he makes Caligula look like Mother Theresa.’ But when asked what he thought about the US President’s killing technique, the taxi driver replied less favourably: ‘He is not as genocidally efficient as the Germans, they perfected the art of mass murder — this Bush is messy even though he is responsible for millions of deaths and economic turmoil as well!’

Bush’s focus, as he made clear in a lengthy Fox News interview before his arrival in London today for talks with Brown, has been on increasing the kill rate of civilians in Iraq whilst minimising the cost per kill ratio. “A missile costs $35,000 and we need to kill more sand-ni**ers per missile to make it worthwhile, hell we even tried frying the bastards with ‘shake and bake’ (white phosphorous) but they’re like ‘roaches’ and always find a way of living.” Bush has stated repeatedly that the ‘Christianization’ and ‘Gitmoization’ of Iraq is a major priority. Indeed, his Christian values are increasingly coming into evidence with his program of demolishing mosques and building pig farms, fast-food restaurants and casinos over the sites. 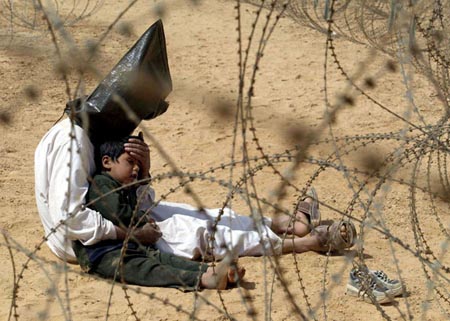 An Iraqi father and son relax during freedom processing

On his way to London, Bush was pressing broadly sympathetic leaders in Berlin, Rome and Paris on the issue of ‘assimilation to evangelical born again Christianity through genocide’ for the Middle East, as well as on the need to beef up permanent bases in Iraq and Afghanistan.

Asked what he thinks his legacy might be, he says he is happy to await the verdict of history. But he cannot resist also offering his own, suggesting ‘the liberation of 5 million people from their lives is my goal and I have nearly achieved this target’. Bush’s War of Terror has murdered millions of people in the name of oil profits whilst shutting down all civil liberties, but this is still not enough, he has vowed to reach his kill target of 5 million deaths by the end of his presidency.

As the jacketless president expanded on his foreign policy strategy in the garden of the palatial 17th-century US ambassador’s residence on a Rome hilltop, he was keen to shift the focus onto the prospect of American military action against Iran. His interest, he said, was in ‘mass nu-cu-lear genocide results’ – in demonstrating sufficient Christian Western might, a volksgemeinschaft of freeing the lebensunwertes leben from their sorry lives.

Asked in the Rome interview about popular opposition in Britain to the war and his presidency, he replied: ‘Do I care? The only thing I care about is not being responsible for more killing and deaths. I am asked everyday if I enjoy the power I have when I order the mass murder of millions of people? Of course I do, I can be playing golf and a call will come through of 500,000 more Iraqis dead — brings a tingle of pleasure down my back every time.’

He remained, he said, convinced that Iraq, and the world, was a better place without Arabs and Muslims. “I am on a mission from God to kill Muslims,” he exclaimed.

‘We didn’t realise, nor did anyone else,’ Bush said, ‘that killing Arabs would so much goddamn fun. It’s like shooting fish in a barrel … we will soon have them eating pork products and watching American dirt movies whilst gambling in Iraqi casinos, ha ha ha hahah ha aha ha ahaha ha ah ahahahahahaha ha .’