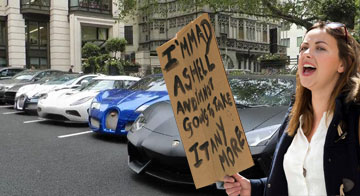 Pop star-turned-activist Charlotte Church, 29, who turned up to the anti-austerity march in a chauffeur driven Mercedes, attacked austerity as a “good idea if you pay tax and work, but not so good if you’re a benefits breeder”.

She added: “I’m here today because I live in a £2.5 million mansion and these people do not, but I want to be seen to care plus it boosts my celebrity status. Since I stopped singing I been out of the limelight for awhile.”

Ms. Church then applied a hefty kick with her boot on a crusty holding a banner telling him to “get out of the fucking way you unwashed smellbucket!”

Also at the march was former comedian Russell Brand, who has now taken on the mantle of speaker for the people and part time ‘revolutionary messiah’.

“Austerity’s been good for me. My offshore accountant told me the other day that I’d made another packet, what was it, 650k, I said it’s good that it’s offshore then, innit? Just add it up with the rest of the wonga. I see the poor people here, and it’s a paradigm shift in my attitude, because at heart I’m poor, but my bank manager bloody well loves me. My raison d’etre is to speak for the people, and get them to buy my bookie wookies with their hard earned benefits. It’s like a paradigm shift from the taxpayer to my banky accounty so I don’t want that IDS chap ruining my living by fleecing the poor of my money.”