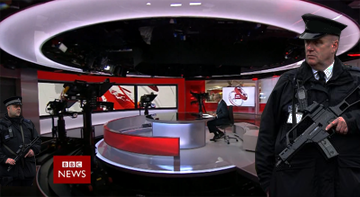 BBC news studios will have trained armed adjudicators attending during and leading up to the EU referendum, ministers have revealed.

The proposed amendment to the EU Referendum Bill, tabled by a group of Labour and Tory backbenchers, would see the corporation monitored by an “armed impartiality adjudicator”.

The new, independent impartiality adjudicators would be armed with Heckler & Koch sub machine guns and on standby inside BBC news rooms to act immediately on any accusation of bias within the BBC.

Tory MP John Kalashnicough said: “The independent adjudicators are highly trained in impartiality and marksmanship, all it would take for a BBC newsreader would be a wrong word here or there rooting for the EU. Bang! Of course, we will make sure the screens are blanked out so the audience does not see what happens.”

A BBC spokesman said: “The BBC is already committed to impartiality under the terms of its Charter and editorial guidelines, *cough* Bu-u-u-u-ll-sh-i-t!”

After the BBC spokesman said that, he was summarily taken to the back of the studio and executed.