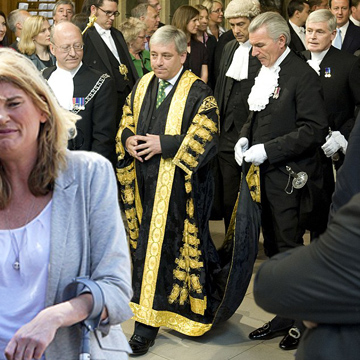 The Serjeant at Arms and the Trainbearer were repeatedly interrupted by a sobbing sound but continued the procession despite the disruption.

The procession crossed the Prince’s Chamber before the incessant sobbing got louder and louder eventually rising to a crescendo of desperate wailing.

When the police inspector yelled ‘Hats off strangers!’ crutches were thrown across the path of the Speaker hitting the Black Rod on the head with an almighty crash.

The woman was led away immediately after the procession and interred in a police van, never to be seen again.