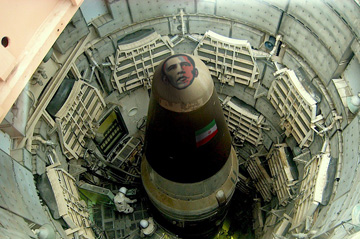 “We want to say a heartfelt thank you to Obama, without his assistance we would not be this close to making our first nukes. When that thing gets blasted off, it will have a big fucking smiling face on it, as a symbol of how we duped the Americans in their own demise, helped, of course, by the naive president who knows nothing about geopolitics or world affairs. Hell, my seven-year-old kid knows more than that idiot,” Mahmoudi said whilst chuckling like a hyena.

The so-called brokered agreement promises to lift sanctions only on the proviso that the Iranians curtail their ‘known’ nuclear program, which is in effect another naive wish from the president and will never be honoured by Iran.

“We already have the silos filled with Intercontinental nuclear missiles, and we got a man to paint Obama’s head on the front and sides. When those babies lift off, that will be the final countdown,” Mahmoudi added.