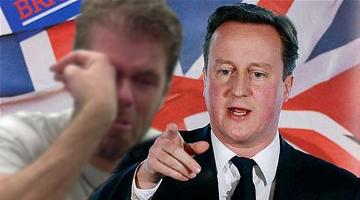 “I emphatically refuse to do an election TV debate unless my dear friend Perez Hilton has a chair,” the Prime Minister told an electoral select committee on Monday.

Why on earth would David Cameron want a chicken tattle tale limp wristed yellow mess like Perez Hilton on a TV debate?

According to Cameron’s election campaign leader, Bunny Lieber, the Prime Minister feels great affiliation with Perez and wants someone up there who he can bounce ideas off.

“David Cameron is a keen CBB fan, absolutely obsessed with Perez, much to the consternation of his former paramour Nick Clegg. The love is definitely gone between those two.”

The Liberal Democrats, Ukip and Labour have all agreed to Cameron’s selection, although Nick Clegg may sulk in the corner during the TV debate.