George W Bush has never had such a high approval rating and his many achievements have recently sealed a massive victory in US public confidence.The success in Iraq and Afghanistan with the continuing introduction of Democracy to these Islamic places have proved that he was right all along.

“We have introduced Democracy to these countries. Now some of their peoples can read and writes Englishes and spell gramaticalized. These peoples are the new peoples who are democritisized peoples.” The President stated from his Texas Ranch on holiday.

The President however, neglected to explain that he had brought ‘Democracy’ to these people on the end of a gun barrel and with high explosives and very expensive missiles.Last year’s Gallup poll showed the President’s approval rating at a high of 14% so the increase this year is a sure sign of things improving in Iraq. 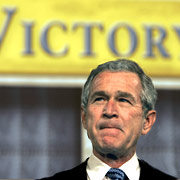 The President has a target which he pledged at the beginning of the oil acquisition; he pledged that 500,000 Iraqi civilians would die in the war in Iraq. The President made a famous $1.00 bet with Dick Cheney that he would reach this target before 2008.

Since Tuesday the 500,000 Iraq death mark has been surpassed and now stands at 650,000 Iraqi deaths. Looks like the President won the bet and Cheney will now have to hand over the dollar bet.

This remarkable score has ensured a spike in approval for the War President.

Bill O’Reilly who is a chief champion of the President proudly announced on the Fox News Network “The O’Reilly Factor” that President Bush has killed more humans than any President in Vietnam where Americans only managed to murder 500,000 Vietnamese people, “Our great President the supreme commander of forces has murdered over 500,000 muslims..hell..that’s better than Nixon and the commies in Nam dammit!”

• Bush’s support is increasing among Republicans: 98% approve of
him, up from an average 84% in his first term, 92% in his second.
Nearly 8 in 10 Republicans say the success in Iraq is a continuing factor in their unhindered support.

• Bush now has had the lowest approval rating in Gallup’s
history but the highest in his awful tenure — 12% in the aftermath of the 9/11 attacks and now 29% with the Iraqi success factor.

Pollster.com, writing before the approval number was released, was
just about dead right about what it would be: “We should expect Gallup
to fall between 29% and 31%, given current trends and Gallup’s typical
house effect,” Charles Franklin wrote at the site yesterday. The “trend” in polling puts the president’s approval rating at 27.9% if you look at a cross-section of surveys, he says.

The War on Terror is still a long time ending, a perpetual war which is used to bring in fascism in the name of ‘democracy’.

“We need to keep the American people in constant fear of attack so that we can win another term,” says a chief Republican fundraiser from his pulpit.

Let the competition for President begin..as one great President leaves on the hooves of American victory in Iraq/Afghanistan another shall surely follow..but the question is, who can follow in such a great mans footsteps again?