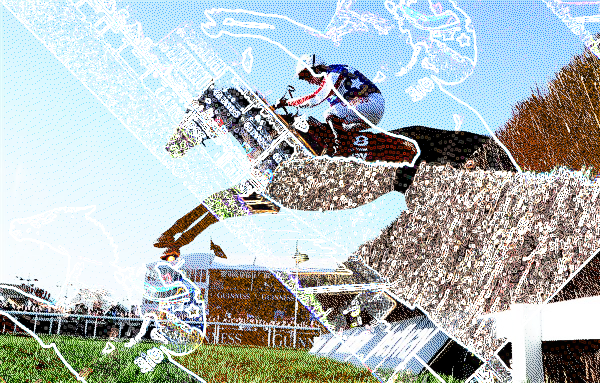 March’s meeting signals the pinnacle of National Hunt racing as the best horses, jockeys and trainers head to Prestbury Park for the famous four-day event.

If nothing else, you can guarantee a dramatic week of intense racing action.

Gordon Elliott had a superb Festival in 2017 and he can get next year’s edition off to the perfect start with a winner in the first.

Having won his last three races relatively comfortably, Mengli Khan can add a Cheltenham win to his list in the coming months.

SAMCRO, also trained by Elliott, is likely to feature at the Festival but could be aimed at a
different race given Mengli Khan’s achievements thus far. Barring a major injury, he will be
very difficult to beat.

A wide-open affair. FOOTPAD has attracted plenty of betting attention in ante-post markets
and with good reason. He won convincingly over two miles, one furlong at Navan last time
out and has the quality to defeat his rivals here.

SCEAU ROYAL emerged victorious at the Henry VIII Novices’ Chase at Sandown this month and he may be the main danger.

NORTH HILL HARVEY, trained by Dan Skelton, is something of a course specialist and he
will relish any conditions. Come rain or shine, he will be there or thereabouts and this could
be the highlight of the first day’s racing.

Doubts over FAUGHEEN’s presence in the race may tempt punters to look elsewhere in the
betting markets. If he runs, the Rich Ricci-owned superstar will be the one to beat – he was
dominant when winning at Punchestown on his comeback in November.

BUVEUR D’AIR will not relinquish his crown easily though; the defending champion will be in the mix.

DEFI DU SEUIL is an interesting candidate here. He was disappointing on his seasonal
debut at Ascot when odds-on but should bounce back. If targeted for this race, he could
feature prominently. Still a very cloudy race as we approach Christmas…

PRESENTING PERCY won well at the 2017 Festival but has been a bit of a mixed bag in
recent months. He was impressive when winning at Fairyhouse at the start of December
though and should go close on that form. An 8/1 shot at the time of writing, he will feature in tips at Timeform in the coming months.

Meanwhile, this could be a target for DEATH DUTY. He was travelling nicely when unseating his rider in the Albert Bartlett Novices’ Hurdle earlier this year and could make up
for that mistake. A convincing winner in his last three races, he has proven himself in Grade One company and could be the one to beat.

News of DOUVAN’s injury shocked the racing world earlier this month and MIN may fly the
flag for the Willie Mullins camp in this race. Yet to win a race at the Festival, the 2016
Supreme Novices’ runner-up has won three out of three since. He will be tough to stop if Mullins gets him to the peak of his powers.

ALTIOR will head the betting for this race – and it is easy to see why. Nicky Henderson has a real diamond on his hands and he could have the beating of Min again here. It is difficult to back against Altior given his achievements but Tingle Creek winner POLITOLOGUE must
be respected for Paul Nicholls.

DEATH DUTY features prominently in the betting for this race too – and Elliott may be
more inclined to target the JLT. But he may have to go up against the well-fancied

FINIAN’S OSCAR and that is no easy task. The Colin Tizzard-trained star missed the 2017 Festival but has won at Cheltenham before and should go close.

Another horse not getting as much respect as he maybe deserves is WILLOUGHBY COURT.

A convincing winner at Newbury last time out, he is a general 8/1 shot to win the JLT and it
wouldn’t be a huge surprise to see him claim a sixth successive victory at the Festival.

One of the highlights of the Festival. UN DE SCEAUX will probably start as favourite but he
won’t be too far ahead of FOX NORTON in the betting. Both horses are capable of winning
at Grade One level and punters will be eagerly anticipating what could be a classic head to
head contest.

Outside of the top two, the enigmatic YORKHILL may go close if he is aimed at this race.
He is probably going to go elsewhere but should be respected. TOP NOTCH is another who
is likely to feature in a different race although it wouldn’t be a massive surprise if he gets an entry either…

NICHOLS CANYON was a superb winner of this race in 2017 and a second successive win
over the longer distance could be on the cards. Since winning the Stayers Hurdle, he has lost by a short head to rival UNOWHATIMEANHARRY and by nine lengths to the impressive
APPLE’S JADE last time out – both are near the top of the markets for this race.

Whilst the latter may be aimed at the Mares Hurdle, the former will almost certainly head to Cheltenham. He was a short-priced favourite for this year’s renewal but struggled to keep pace when the going got tough. Nichols Canyon isn’t invincible but he will take some
beating here as he is arguably the class horse in the field.

After four days of fantastic racing action, it all boils down to this: the Gold Cup. One of the
most prestigious races in the industry, this is the one that everybody wants to win and 2017 winner SIZING JOHN will be the one to beat. He is one of the most exciting horses to watch on current form and should go close once again.

MIGHT BITE loves it around Cheltenham though and deserves his spot near the top of the
betting markets. Henderson believes that he is one of the most talented horses that he has
ever worked with and you’d have to make him right on talent alone. YORKHILL and Betfair
Chase winner BRISTOL DE MAI also deserve a hat tip in what could be a memorable race.