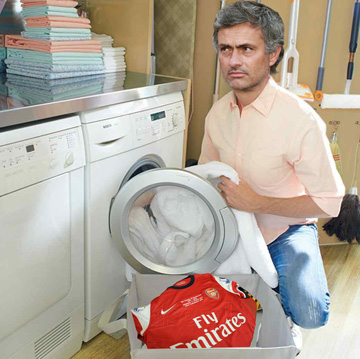 “After the game, usually when Arsenal wins, they throw their used socks, underpants on the floor or at my head. Then Wenger, he walk in and tell me to pick them up and clean it all up. It’s a good job they pay me £120 per week and I still get to watch real footsball, innit,” the former Chelsea manager told Football magazine.

Even though there used to be a certain rivalry between Wenger and Mourinho in the past, the Arsenal manager felt sorry for his former foe deciding to give him a job and a laundry sack instead of another sacking.

Mourinho hopes to get a promotion in a few years time, if he cleans up well to Emirates toilet cleaner, earning a whopping £200 a week.