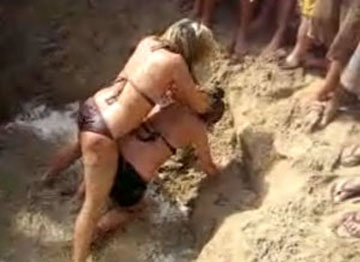 “It’s gonna be like the Red Neck Games but with some women who think they can do politics. Personally I can’t wait,” Esparto Dunce, a political commentator on Capitol Hill told Fox news.

According to election organisers, on the day of the election, a big mud wrestling pit will be constructed directly outside the White House grounds which will be made to look like Hazzard County. All the TV networks have already signed up for the 2016 Presidential All Girl Mud Wrestle Fest, current president Barack Obama will be watching, probably with much amusement, and is even urging Michelle to join in.

A mud wrestling aficionado from Kentucky, Balthazar Mulrones told Fox news: “Dang I can’t wait. I’m gonna get some rotten tomatoes to throw at ‘em. I’m rooting for Sarah Palin, she’s a wild one, but y’all gotta watch out for Hillary, a mean mangy player who don’t mind playin’ dirty.”