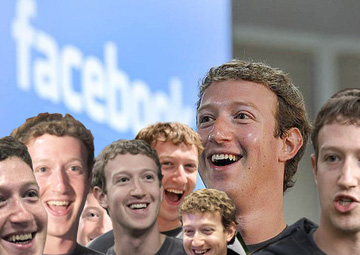 Mark Zuckerberg recently used some of his pocket change to acquire an up and coming company called Oculus Rift.

“I’m so happy. We’re going to have every person on the planet now wearing these head pieces. You won’t be able to take them off because they’ll be sewn onto your fucking head. Just think wherever you look, whoever you see and talk to, it will be my smiling face on the body. You can’t hide from Facebook or the mighty Zuck.”

Facebook is even planning on dropping these things from drones in Africa so they can enjoy the benefits of such technology.

Dengo Matwa, a bicycle repair man from Kiralwo, East Africa said: “I live in a corrugated iron shack. This Zuckerberg guy put a leaflet through my hatch the other day saying I can live in a king’s palace with Facebook signs everywhere and Zuckerberg faces all over the place just by having this thing sewn on my head. Thank you but I would rather keep my rusty tin can shack and once a day bowl of oatmeal.”