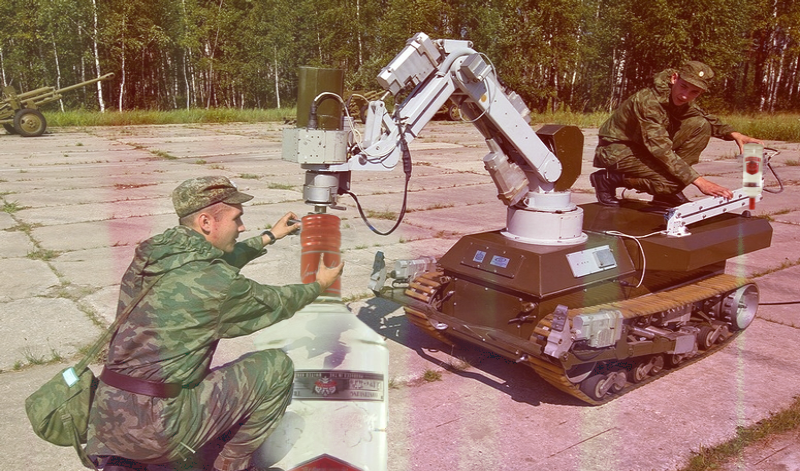 What better way to get killer robots to do what you want them to do — get them addicted to vodka.

The AI killer robots used by the Russian army are heavy duty alcoholics who feast on copious amounts of vodka.

“We first get them used to the vodka. For a few months they are pumped with the good stuff, then we suddenly withdraw all vodka. The robots naturally go crazy, their addiction is so so great they will do anything for their next fix. This is when we ask them to kill everything in sight, and afterwards they get a big tanker of vodka for a reward.”

Much like the Russian army regulars who are fuelled by vodka, the robots take no prisoners when they get their thirst.

The robots designed by Russian army engineers are nothing more than little tanks with turrets but in squads of fifty to a hundred armed with machine gun turrets and missiles are devastating, especially if they have not had vodka for a few days.

“You ever seen an angry Russian who has not had his vodka for a day or so? They get angry, itchy, with sudden outbursts, sweating like pigs. Our robots get very angry, we have to handle them with caution. Even though we have programmed them to not hurt us, the vodka desire makes their AI irrational,” Dimitrov added.

NATO high command officials are said to be weary of such Russian ingenuity, and are trying to counteract the deadly vodka addicted Russian robots by introducing a type of robot that will strike fear into any enemy that dares to attack — AI robots that are addicted to coffee. Yes, the fuel for the new autonomous will be a Starbucks dream come true.

AI engineer, Miles Rubio, explained how the robots are fuelled at a recent Military Symposium in Switzerland.

“Americans are fuelled by coffee. We wanted something that makes Americans go crazy if they don’t get their fix, and that’s the coffee. These robots much like Americans go absolutely nuts if they don’t have gallons of coffee daily. This is how we made the robots into very efficient killers…lol.”