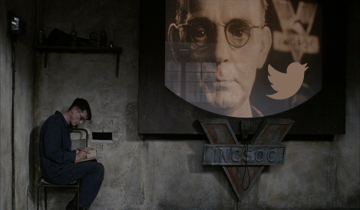 The Orwellian nightmare where thoughtcrime can be punished by physical arrest is upon us much sooner than was thought possible.

“I would have thought the Soviet techniques would have been rolled out in 2050 but we’re still in 2016 and that’s a big move in my humble opinion. Twitter is now controlled completely by one single Soviet point of view, there are no alternative views allowed, and if you even try to discuss something you are erased immediately,” a man of reason and logic wrote, before being blocked, his account erased and the necessary authorities notified.

It is interesting to note that so-called liberals in America who are meant to be ‘free thinking progressives’ are actually authoritarian Marxists who shut down any form of discussion and label it ‘hate speech’ or ‘dissent’. These Marxist politically correct denizens of inequity and misappropriation are an affront to intelligence, because freedom of speech is a prerequisite element of any normal functioning society, especially one that aspires to embrace intellectual thought-provoking discussion. If you shut off the voice of people you may disagree with, you ensure only a one sided skewed message is broadcast within your totalitarian sand box.

More than 40 organizations and ‘experts’ from 13 regions, who are all either militant leftists, socialists, and Marxists are joining as inaugural members of Twitter’s freshly-created ‘Trust and Safety Council’ synonymous with George Orwell’s ‘Thought Police’ in his novel, 1984.

Looking at Twitter’s spectacular fall in the stock market below its original IPO level, there is a certainty that this erroneous anti-free speech move by Twitter will see even more severe declines in their already plummeting stock as millions abscond from the site every month.

By only embracing a one-sided deconstructive voice of militant socialism, Marxism and feminism, Twitter is now alienating large groups of people who will have to look elsewhere to exercise their right to free speech. Twitter will thus be only a tool to disseminate left-wing propaganda within a totalitarian Marxist environment of political correctness.