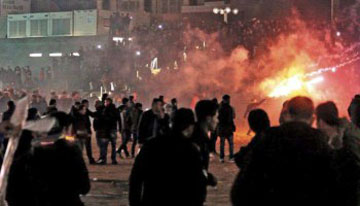 Germans are snapping up a new Japanese invention that shoots out a net at an assailant enabling the women to escape or call police.

Demand for over the counter self defence products rose in response to the massive sex assaults, brutal gang rapes, and thefts committed by Arab and North African migrants in Cologne and Hamburg on New Year’s Eve.

The Japanese device can be used by multiple women on the same person, and is proving so useful that production has increased to cope with the massive demand.

Reminiscent of something you would find in a live-action superhero television show, the net launcher is a handheld device that shoots out a net projectile.

The launcher has a built-in alarm to alert others that the device has been fired. The net can be fired from 2 to 3 meters from the intended target.

When two or more nets are used together, the sex crazed migrant will be completely engulfed in netting and will have a very difficult time trying to escape.

The Japanese company is also planning to introduce a metallic net that will electrocute the assailant once the device is released.

Ichi Yoshimitsu, CEO for the company said: “Once the threat is neutralised by the net, we also administer 60,000 volts intermittently onto the person until the police eventually arrive.”

German women will need the devices more than ever now as an extra 10 million Arabs are set to arrive in Germany by 2017.