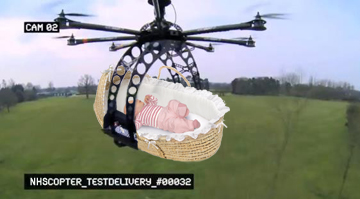 Drones are big business as online stores and postal services have been capitalising on their popularity by conducting logistical deliveries in the US and the UK, but what about babies?

Hospitals are now the next drone front line where drones could be replacing storks for that all important delivery moment.

“We’ve already trialled a few deliveries by drone this month and plan to roll out a more intensive service next month,” NHS planner, Rupert Sanders, told the BBC.

How does the drone delivery work, and what’s more, is it safe?

According to a recent consultancy funded by the government, drones are actually safer than midwives because they have less germs and are accurate to the millimetre. When the woman is in labour, the drone will be activated and will hover under the area where it calculates the trajectory of the baby expulsion will be. The specialist drones have a cushioned basket to catch the baby delivery. So far, tests carried out by the scheme have a 95% chance of success when catching the baby as it is being ejected from the mother.

“We can also deliver babies via drone to any address in the UK, of course after the mother has had her initial time with the newborn. Not all parents can take their babies home with cars and some live in rural secluded areas of the country,” Mr. Sanders revealed.

The NHS could save over £380 million per annum when the drone deliveries are rolled out in January 2015.