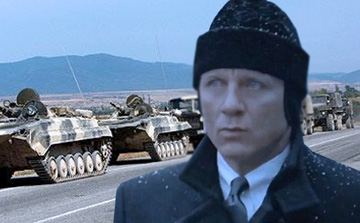 “The latest instalment from James Bond will involve the secret agent hanging around Ukraine while it’s being invaded by Russia with thousands of tanks,” Tubby Celery, the new film’s producer revealed today.

It will be up to the secret agent to report back to MI6 all of the goings on as the native Ukrainian people run for their lives during the invasion.

Bond will be up against a Russian spy, Olga Takitoff, and this time he meets his vodka Martini shaken and stirred.

“I’m not going to reveal the plot of the film but let’s just say James Bond always wins in all the films, but in this one, he gets a tank shell embedded in his arse. Oops! I just spoiled the end of the film,” Mr Celery apologetically said before slinking away with his head bowed.