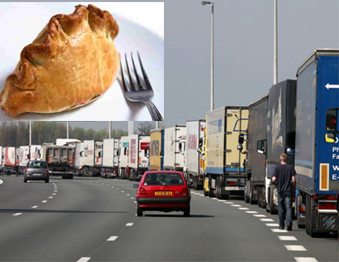 Now that Cornwall has seceded from the rest of the country, Cornish pasties have become somewhat of a rarity.

“We’re like the French now, we put a blockade on everything because we’re so superior. If you want a pasty, make your own, you snivelling gits,” Hadrek Casworon, a Cornish pasty dealer from Cornwall told a BBC reporter before giving him a good punt in the gangools.

MPs at Westminster have however sought to thwart the pasty blockade by sending in trucks full of fish and chips, you know as a negotiating tool.

“We are dismayed at this Cornish arrogance towards the rest of the country. We demand the blockade is lifted immediately and the Cornish pasties released,” Graham Natswallop, MP for Chesterwick, said on Friday.

Former Labour MP, John Prescott, is so upset at the moment that he has locked himself in a darkened room.

Meanwhile, across the border up North, further trouble was brewing as the Scots threatened to blockade a delivery of haggis down South, the funny thing is, no one is that much bothered about that.