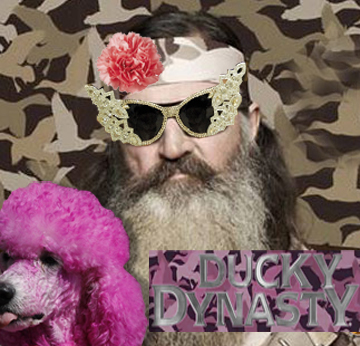 The new Ducky Dynasty show will be aired in January on the GLAAD owned network A&E (Ass&Elbow).

The reality show star was forced to enter an Obamacare Re-Education Center in Los Angeles last week after he dared point out the fact that straight men do not like having sexual intercourse with other men’s anuses and prefer the female vagina.

“It is illegal in the United States to prefer a woman’s vagina over a man’s anus. This was atrocious behaviour and to even talk about it in a magazine contravenes free speech. That’s why we shut the man’s show down and ordered him to be gayer for the Obama nation we are under right now,” an A&E spokesman, Lamar Durtbutte told CNN.

Phil Robertson, had a few words to say about his new look: “I would like to say to my fans of the show, er…I’m a rehabilitated person, I am sorry I said those things, you know about men preferring women’s parts to some guy’s hairy smelly butt hole. I used to think that the butt was biologically designed for only pooing out of, but now I know that was wrong. You know after my time at the Obamacare re-education camp, I was whipped into submission by a Catholic priest, especially after they said they would take away all my money. I had to do what I had to do. Now bend over Binky, I gotta present for you and it ain’t a marshmallow.”

The new Ducky Dynasty format will be held in a beauty parlour where the boys will talk about the latest fashions in cammo, they will be giving some GLAAD activists and Obama voters styling tips on how to oil and perfume your beard whilst out ducky hunting in bars and show audiences how to dress right when going to saunas. Filmed in San Francisco, Ducky Dynasty has been a huge ratings hit in the city and the mayor is even planning putting up a rainbow coloured statue of the boys bending over and looking over their shoulders in anticipation.