Home Entertainment Can Vlad the Imperialist Take Our Playbook Further? 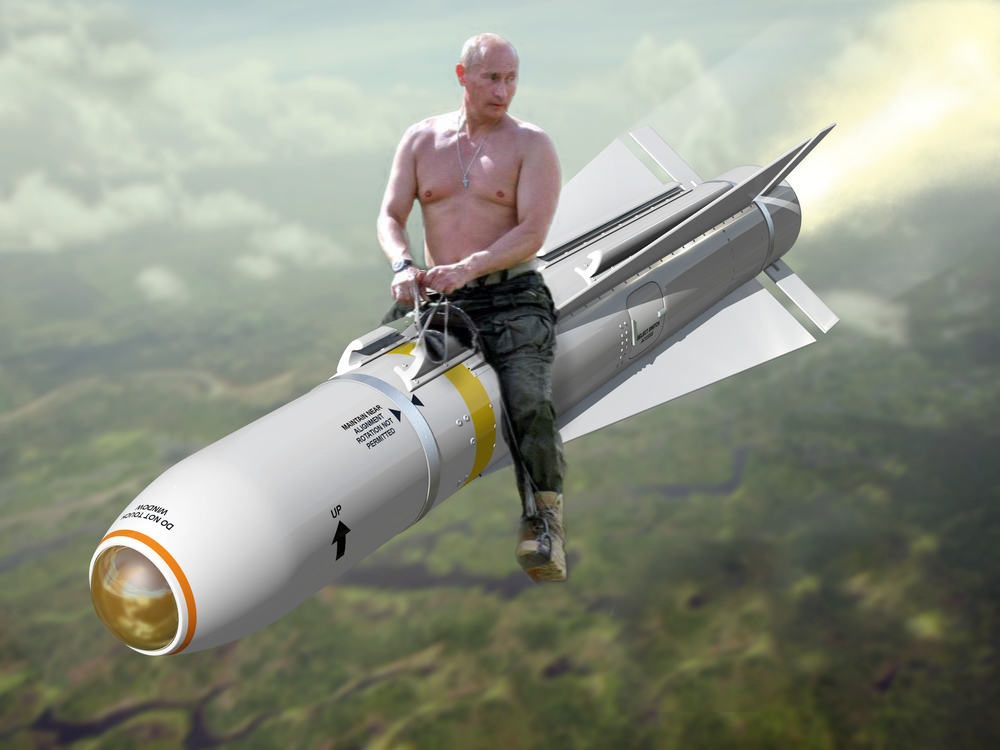 Colonel Z. Brinkman Shadowplay III (Berlin, Kentucky Airlift Campaign Medal, Louisiana National Guard Bazooka Marksmanship Ribbon, Antarctica Gallantry Medal, Medal of Honor [completed level 14], B.Sc., K.I.A. with three bars) is a perilously unstable individual and, therefore, one of the United States’ most decorated soldiers. As a CIA counter-insurgency specialist, he masterminded ‘Operation Red Squirrel’ in 1961 against Marxist-Leninist elements among the medium-sized rodent population of Brownsea Island, Dorset. Thanks exclusively to his work, Brownsea Island was never subsumed into the Warsaw Pact. More recently he volunteered to help Donald Trump raise a private army of anyone who stormed the Capitol building on January 6th 2021, and is currently Tucker Carlson’s most frequent guest on Fox News. Here he shares a letter he has written to his old friend, Vladimir Putin.

Feels like only yesterday when you, me and your mentor Boris Yeltsin met in the Kremlin bar one icy morning to sink 38 White Russians. (To be fair, I think Boris had 36 of them). With the help of us Americans, you boys’d just freed yourselves from heathen commieness by privatising your industries, slashing spending, deregulating prices and liberalising foreign trade. A lickety split later, y’all got the full benefits of late capitalism. 13 million got fired, while any folks who kept their jobs lost half their wages. Corruption and organised crime went up faster than a burning cross in central Mississippi. Whole industries went to diddly squat. Hyperinflation tore up all your savings. Your GNP sank by 83%. According to that woke-ass rag The Nation magazine, ‘policies that were supposed to reap the fruits of the free market instead helped to create a system of tycoon capitalism run for the benefit of a corrupt political oligarchy.’

Good job, boys, I remember thinking at the time. In them heady days, Vladdy-boy, you worked for the local government of Leningrad, then for the Federal Security Service (FSB), so you must take your share of the credit alongside my best bubba Boris.

I came back to visit you in 2000 when you were president of the whole hot-dang Federation. Just as randy Bill Clinton had fawned over Yeltsin – I was there when he said, ‘We’ll build the partnership on the basis of our friendship, yours and mine, and we’ll do so for the sake of world peace’ – that psycho killer-after-my-own-heart Tony Blair praised you as ‘a leader who is ready to embrace a new relationship with the European Union and the United States, who wants a strong and modern Russia and a strong relationship with the West.’

Over another ‘full Russian breakfast’ I said to you, ‘Man, now you’re part of the Free World, you gotta step up to the plate and hit a home run in the Great Game of imperialism – just like Uncle Sam. If your oligarchs wanna keep their vodka lakes full and their caviar mountains high, you gotta make Russia great again by giving Jiminy Foreigner and Tommy Third-Worlder a darn good barbecuing.’ You seemed to catch my drift.

Then we rode half-naked on horseback to your personal ice hockey stadium to clash our sticks together. After that, I pinned you on the judo mat in your bedroom. You looked scared. When I suggested a Women In Love-style wrestling match you looked even more scared. If only you’d been pot-roasted and butter-milked in your rookie dorm at West Point like I was, you’d have got with the programme and enjoyed yourself too.

What that incident taught me, Vladdy-boy, was that in them days you weren’t butch enough. When you flexed your biceps on the world stage you came off like Woody Allen trying to win Mr Universe. You wouldn’t have known an aggressive foreign policy if it snuck up behind you and kicked you in the novichoks. I thought you could spar with the best – the darn tootin’ best of the best – in other words, us. But alas, not then.

Your efforts to grease the Chechens lacked ambition, shall we say. While you did pull off a heap of war crimes and human rights abuses – just like we have since at least 1847 AD – and you persevered despite us simultaneously backing you and declaring our support for the rebels, you didn’t go far enough. I mean, y’all didn’t travel far enough. Chechnya is right on your border! It would be like my country whupping Canada, goddammit! Where’d be the fun in that? Well, they’re quite socialistic nowadays, so maybe that ain’t such a bad idea.

You weren’t thinking big, dude. At roughly the same time as you were chasing Muslamicists around your back yard, we were chasing them 7,000 miles away. The story the DC suits spun didn’t make a whole lotta sense: we had to bomb the liquid shit out of Afghanistan and kill 100,000 of ‘em because some schlub from Saudi Arabia ordered a squad of other schlubs – also mostly from Saudi Arabia – to attack New York and Virginia. But truth to tell, we needed the Taliban to vamoose so our JR Ewings could build a pipeline through their raggedy-ass land and whisk bazillions of dark gold from the Caspian basin.

After that, the suits were saying Saddam Insane was both in on 9/11 and 45 minutes away from zapping our polite little cousins over in the UK of A. Luckily, enough chumps bought that horsecrap rather than the reality – which was we needed more SUV-juice – and we charged in there to whack a half million of them while they whacked only 4,000 of us – a swell result, if you ask me. Now V-laddio, that was fake news at its best. In my Agency days we used to call it psy-ops, and it accomplished way more than your intraweb hacker sissies who made jack difference to the Brexit vote or Trump’s election. What the hell were you trying to achieve there anyhow, fella? Whether that hell-hole of humble Hugh Grants had stayed in the EU and whether the Orange Genius or Gung-Ho Hillary had won, we’d have carried on bossing the whole doggone planet anyways.

I know you’re uppity about NATO expansion. While my recall of the 1990 talks is hazy – I blame them White Russians again – we made noises to y’all about us not deploying forces to the old East Germany. Then from ‘99 to ‘09 we recruit Poland, Hungary and Czech Republic and a whole bunch of other ex-pinko states. 2020 and in comes North Macedonia – wherever the hell that is – and we’ve been lubing Ukraine up for membership for over a decade (but more on this later). So big deal, we double-crossed you. This is realpolitik, Vlad-of-my-eye, so get used to it and quit your bitching. Jeez, it ain’t like you’ve never lied or U-turned, right?

Which brings us up to date and this golden opportunity you got to throw some punches back. Like Crimea, Ukraine may be your next-door neighbour but it ain’t a pushover: it’s the second-largest country in Europe with at least $2.5 billion of boomtubes, crashbangs and damned-if-I-knows… that we sold them. So it’s tricky for you, V-boy, but at least there ain’t gonna be no GI Joe boots on the ground. Why not? ‘Cos unlike Guatemala, North Korea, Cuba, North Vietnam, Laos, Cambodia, Dominican Republic, El Salvador, Palestine, Grenada, Panama, Nicaragua, Somalia, Serbia, Afghanistan, Iraq and Libya… you were smart enough to get some nukes.

You’re under pressure, my little Vlad of light. I know how that feels, ‘cos my team has made itself unpopular all over the world – especially in the Middle East – simply because we’ve made the world – especially the Middle East – a whole lot better. Go figure, right? But don’t sweat when they say they’re gonna cuff and stuff you for war crimes. I’ve done hundreds and they’ve never given two raccoon’s asses about it! My team were condemned by the International Court of Justice for aiding the fascist Contra death squads in Nicaragua who murdered nuns and pregnant women. But I’m still here, ain’t I?

And now here we are supporting fascists again in the Ukraine-soon-to-be-of-A. As them libtards at The Nation reported a couple of years back, ‘There are neo-Nazi pogroms against the Roma, rampant attacks on feminists and LGBT groups, book bans, and state-sponsored glorification of Nazi collaborators.’ Now that’s the kinda democracy America likes to get behind!

But, Vlad of my life, you can’t just copy our playbook, you gotta go further. I ain’t just talking about this nuclear alert jazz. Been there, done that, got radiation-sick over my own T-shirt. Shit, it was yours truly who advised Dick Cheney and James Baker to tell Mad Saddam in ‘91 that we’d pitch nukes at him if he pitched chems at our allies. And before that we were fixin’ for some mushroom cloud-laying just after 9/11 and during the Yom Kippur War and Cuban Missile Crisis.

But actually using them bad boys? That’s so 1945, man, we did that already. Except here’s the difference: ‘cos we did it to Asians, nobody cared. But nuking white people? Now that’d secure your legacy! To dodge the fallout, jump on whichever private jet or yacht hasn’t yet been seized by the Eurocrats and spend the nuclear winter in Tahiti. I’ll hunker down in my survivalist bunker complex in Arkansas. When this cattywampus blows over we’ll meet for another White Russian. On me, ‘cos you’ll have been totally sanctioned outta roubles by then.

The beautiful thing about war is it’s only the little people who suffer – and on both sides. Us boss hogs, well we almost always do just fine even if we’re on the losing side. We also have the same values: we love God, the nation, military might and free markets. Makes you wonder why we decided to get madder than a wet hen at each other in the first place, right Vladdy-baby?

Tom Sykes has written for Private Eye, The Telegraph, New Statesman, Declassified UK, Red Pepper and Southeast Asia Globe. His latest book, Imagining Manila: Literature, Empire and Orientalism is published by Bloomsbury/IB Tauris. He is Senior Lecturer in Creative Writing and Journalism at the University of Portsmouth.