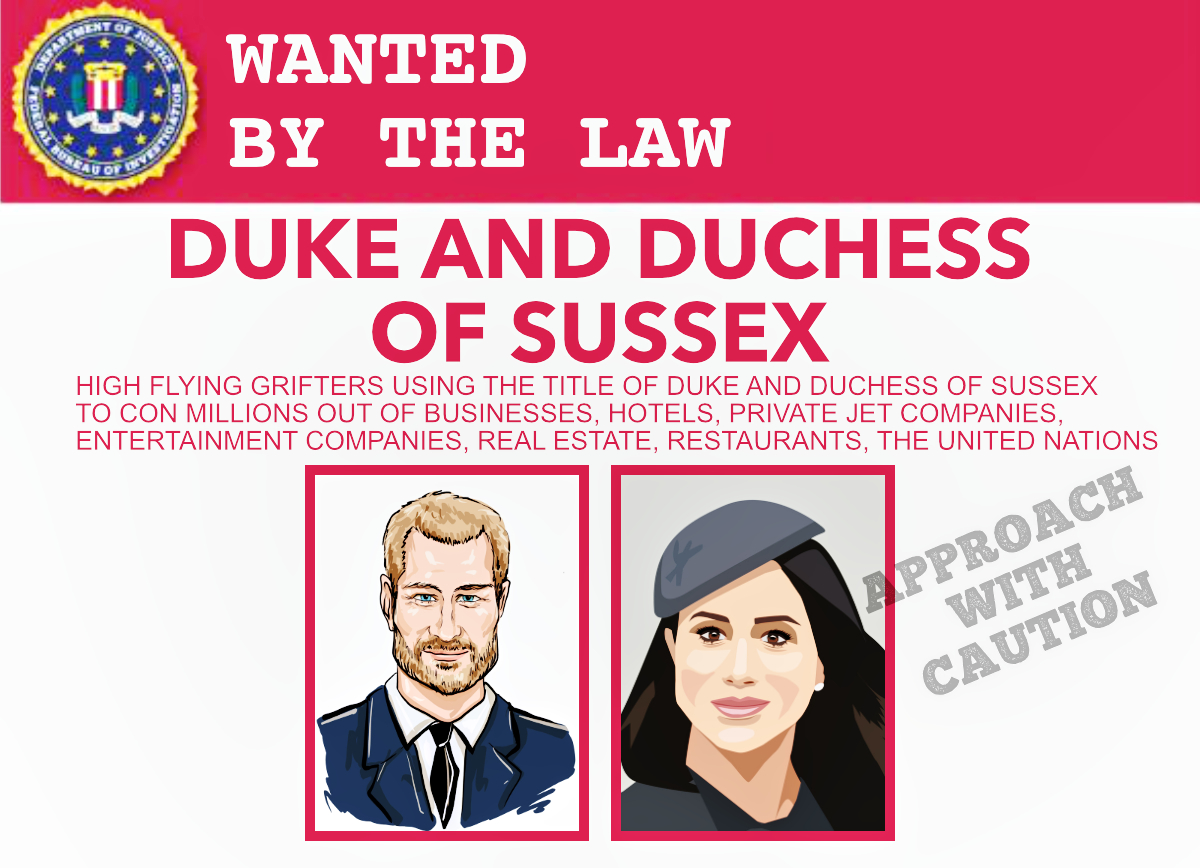 Rodeo Drive was on high alert today when a known con-man and con-woman couple who are wrongly using the royal title of the Duke and Duchess of Sussex were spotted casing out a Beverly Hills jewellery shop on Friday.

Casey Rich, a local real estate agent, said she saw the erroneous couple at about 10.30 am casing a Rodeo Drive jewellers shop famous amongst celebrities.

“They’re well known for taking stuff in the area. They claim they are royal, and that they are entitled to just take anything they want without paying a dime. Last week Moshe Liebovitz, a good friend of mine who owns the premier bakery in the area, was conned out of 300 bagels, a shitload of cinnamon babkas, and a crate full of chocolate rugelach. They must have hired some bozos to look like bodyguards for a few bucks to load up the produce before leaving in a fleet of stolen gas guzzling black SUVs without paying poor Moshe a single fucking cent.”

The couple are also known for hitting five-star hotels where they con themselves into the best suites, and order up vast amounts of room service meals. According to the LAPD, the couple have hit over 35 hotels in September alone without paying for their luxurious stay. In all instances the couple falsely claimed they were royalty from Britain, and showed hotel managers documents with the titles “Duke and Duchess of Sussex”.

Hank Jaspers, a hotel manager for the Beverly Holiday Inn, is out of a job after he was conned by the couple in July. The owners of the hotel fired him after they found out Jaspers allowed the Duke and Duchess of Sussex to stay for three weeks in the hotel’s top suite for free, leaving an unpaid bill for $432,000.

The LAPD Fraud Squad closed in on the couple last week, but sources say the grifting duo skipped LA and turned their con tricks to New York City, even fooling delegates at the UN that they were important royals.

IF YOU SEE THE DUKE AND DUCHESS OF SUSSEX – APPROACH WITH CAUTION! DO NOT GIVE THEM ANY MONEY OR $25 MILLION SPOTIFY PODCAST DEALS FOR ONE MEASLY 15 MINUTE RECORDING. CALL YOUR LOCAL LAW ENFORCEMENT OFFICER IMMEDIATELY.