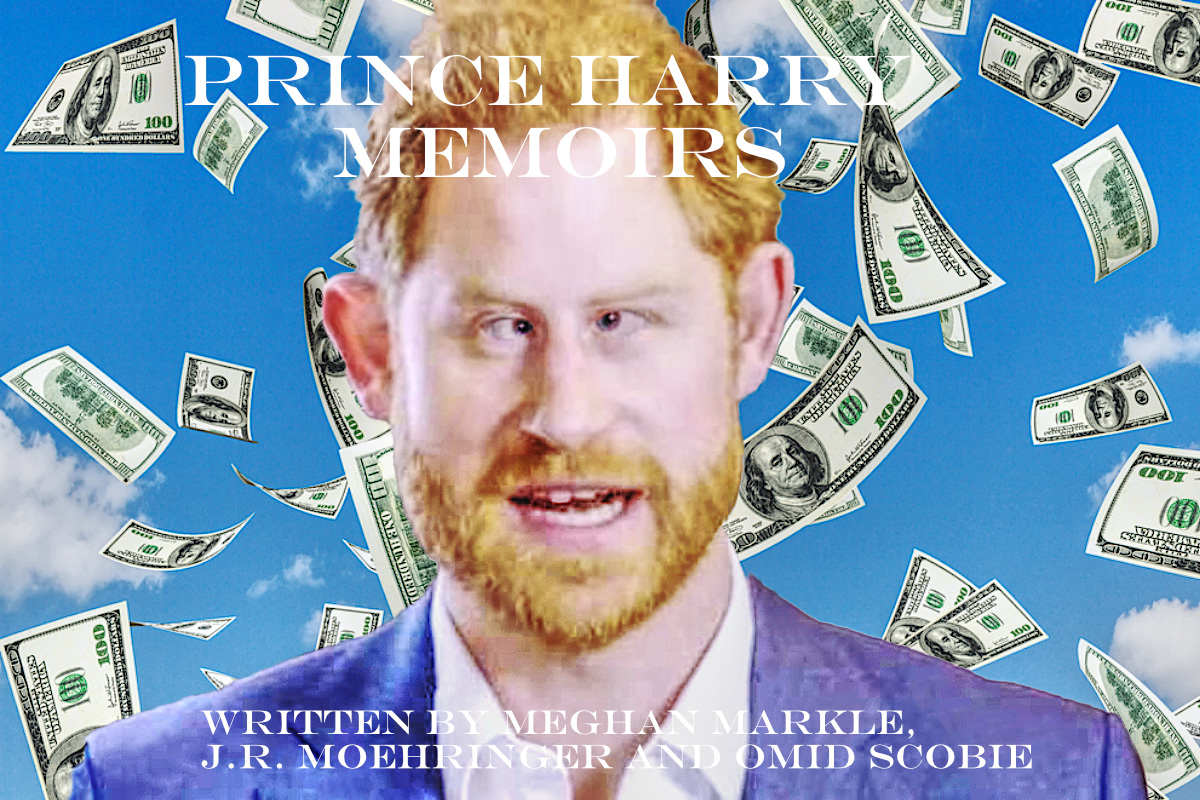 Here, we will reveal some of the passages in the novel, ahem, memoir.

“…and immediately after meeting her, I was totally under her spell. She hypnotised me with her stare, and she told me that I will be an ambassador for all world good. I will also be instrumental in ruining the Windsor royal family to make way for the new Woke communist age of China. At first, I questioned it a little, thinking that I was part of the royal family at the time, but when she unzipped my trousers and knelt down I…”

“…planning our escape came as early as the third date. I was sick of royal life, all the rigmarole of getting everything I asked for without paying for it, playing second fiddle to William really pissed me off when it was I who should be King. I can play rings around Granny, and fool her every time. She has no idea what Meghan is planning to do…”

“…Meghan told me I have to pretend that everything is normal, and must never reveal her plans to escape to America. Tomorrow is our £45 million wedding, so it’s great that the British taxpayer foots that bill as usual. I am so excited that Meghan has thought about everything for me, and she guarantees it will all be okay. We have already spoken to Oprah and Clooney, and Meghan says Netflix is already in the bag. We will use the royal name to make millions. Ooh, can’t wait. This will show papa and Wills that I should not be dismissed and denigrated…”

“…Meghan treats the servants like shit, so I started to do it too. I am so under her control, I cannot even go to the bathroom without asking her first. I put a few more millions in her account simply because she asked. What Meghan wants, she gets…”

“…as soon as we have the baby, we’re off. I can’t take it any more, Meghan constantly talks about using the Sussex name to make millions in America. We have so much dirt on them, it will be great to spill the beans once and for all. Papa was even worried about the baby’s colouring, and Meghan went berserk. To tell you the truth, so was I, in the back of my mind, what if it’s the colour of a jigg*boo? She was on the phone to Oprah for over an hour after that. When she got off the phone, she smiled and said we were going to make millions, before unzipping my trousers and kneeling down…”

“…I will soon see Meghan in Canada. I am so excited. She told me that I have to say goodbye to Britain, and the Royal Family, my military uniforms, my friends, all royal privileges, everything I never worked for including most of my money so that I can start a new life with her. It’s good that she has nothing to lose, and I will lose absolutely everything just because she has me totally under her thumb and can give great blow jobs…”

“…the money is rolling in. We fooled the idiot royal-crazy executives at Netflix, and Spotify to hand over millions. They will get minimal material from us. Meghan wakes up every day and I can literally see dollar signs in her eyes. The other day though, I asked her if I could phone an old friend from England, when she threatened me once again, she said she will leave with the kid and all my money and I will not be able to go back because I have disgraced and betrayed my family. I cried in front of her, but she simply laughed and told me to go and sit in the corner…”

“…and after the Oprah special interview, Meghan was ecstatic. She told me that I played my part great. I told the lies she told me to say with a straight face, happy with my performance, she unzipped my trousers and knelt down…”

More excerpts will be revealed next week.