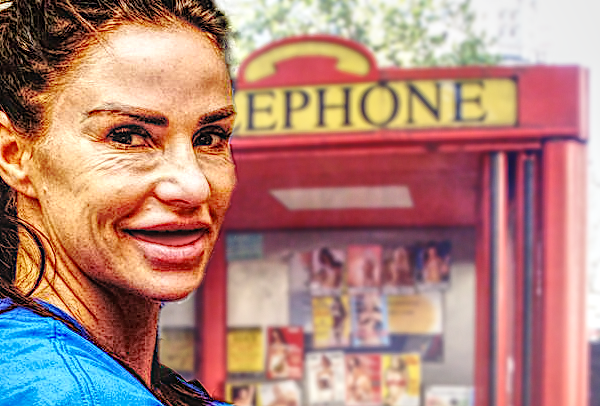 After squandering her £45 million fortune on useless trinkets, pink vehicles and plastic surgery, the former model has fallen on hard times.

The defiant former model now lives in a cardboard box made up of her novels, which were written by a ghost writer, because Price can neither read or write.

In a recent Sun exclusive, reporters visited the down-and-out under Waterloo Bridge where she sleeps and peddles her trade by night.

“Ahm still livin’ it large. This is all a test for me innit. I fink to myself I can get on my pony and ride to the Sath of France to get on a yacht to America to re-make my fortune again innit.”

Katie Price proudly points to the top of her cardboard box lined with her bestselling novels all now found in bargain buckets across the country and pound shops.

“Dis was my fave, I like da picture on it, you’se can see how big my fake breasts were at the time.”

After creditors cleared most of her debts, Ms Price had all of 34 pence in her bank account, but she still owes £13 million which she plans to pay back by doing what she does best.

“Ah na do releef for tramps innit and anyone who comes along. It’s twenty quid per service, and if you let go in my mauff it’s an extra tenner. I love it, it’s the greatest gig in the world, and ma punters always come back maybe give me a black eye or somink, but I can fight back I’m a hard woman innit, I can boot a man across the room no probs! Ahm a femininist..innit.”

After her veneered teeth fell out two months ago because she could not pay the dentist, Katie Price is now without teeth, and gummy. Funnily enough, this makes her an even bigger hit with her clients.

“Afta I lotht ma teef ah thot it would be a naghtmare. I soon fand at th’ punters love me gummie gums innit. No nasty toothy scrapes..innit….na wat amin?” (winks)

Working out of a dimly lit room in the Soho district, Katie has to compete with the Eastern European girls and has even learned how to speak Romanian.

Quite the singer, Katie likes to also serenade prospective clients with choruses from the film Lion King.

Here’s to a bright future for the former celebrity who is actually enjoying her time out of the limelight.