“Watching this movie is like getting some pure Afghan brown, sitting down in your room, putting that cord around your arm and going to bliss land. I felt like I was in a world of cotton wool, where problems were far away from me, I rolled my eyes back and enjoyed the blanket of supreme comfort envelope me, protecting me from everything,” Robert Elswood, 34, a cinemagoer from Chicago told Variety magazine.

“Ten out of ten stars!” screamed Empire magazine’s reviewer. “I went into this movie fully awake. After I got up to leave, at what I thought was the end of the movie I just kept feeling the urge for just one more hit. I had to see it again, and again, and again. I am an addict. My withdrawal symptoms involved violent shaking, projectile vomiting, sweating and grinding my teeth. The slightest touch from someone would feel like searing pain, I was burning up and freezing at the same time. I had to go back to the theatre for another viewing,” James Brownstone, Empire magazine’s chief film reviewer said in his column.

Another reviewer for the New York Times said: “I need rehab after watching this movie. Tomorrow, I’m flying to Thailand to an exclusive detox centre so that I can get clean again.”

The format of ‘Heroin Alone’ is similar to Home Alone I, II, III, IV and V, except Kevin has now grown up and moved out of his parents’ house. He lives in an apartment in the Upper East Side and shoots up heroin alone all day and night. This time, he is good friends with Harry (Joe Pesci) who helps him score more smack by burglarising rich people’s apartments in Manhattan. The poignant part of the movie that will make you tear up, is the bit when he cleans out his parents’ house of everything so that he can get one more hit of heroin. Throughout the well shot cinematic film, Kevin is portrayed as a lost child looking for an answer and only finding it at the end of a needle. There will not be a dry eye in the house, just be sure to take care exiting the cinema you are in, as nationwide, film fans have been dropping used needles on the floors of the film theatres. 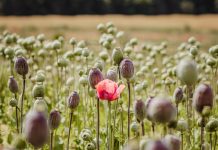