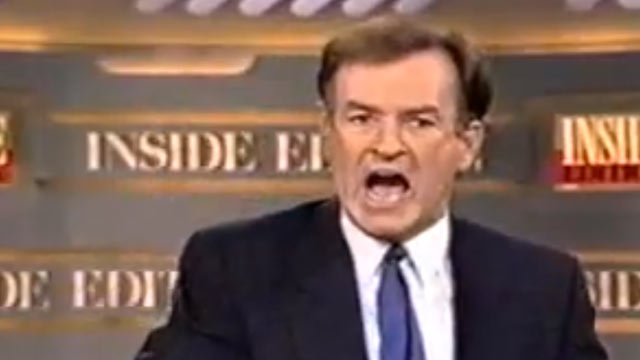 As psychopaths go, it is relatively rare to see and study one up close on screen nearly every day on TV. Most psychopaths reside mainly in the board room of top companies, or government high office, covered away in their ivory towers of business and governmental power politics.

Bill O’Reilly, was an outstanding example of psychopathy and his daily rants instilled in Americans a fervent ideal point of view that only a cold hearted murderous psycho could deliver.

In times of war, there was O’Reilly enjoying every moment of his airtime by telling Americans to obey their masters wholeheartedly without question, telling any dissenters to ‘shut the fuck up’ and employing a murderous outlook on anyone who even looked like an Arab. His psychopathic rage bolstered by his devout Irish Catholic fanaticism.

Behind the scenes in the Fox news network, O’Reilly threw his unwanted advances onto female co-workers with a cold deranged loveless vigour, something a rapist would do, but he was a news anchor so he had the right to do what he wanted, that is until he got caught.

Not easy to work with, O’Reilly rose to the top of the Fox network through brutal office games, burying his opponents in the sand, his psychopathic nature feeling no shame or conscience as he stepped on the skulls of those he had slain to rise up top.

“Psychopathic narcissists like Bill O’Reilly do not feel emotions like real people. They have learned masks and mannerisms to look like they feel, but in truth they have little or no emotion when it comes to the people they crush on the way up. They cause mayhem and discord in the office to further their own needs, and their cold calculating nature helps them get promoted, simply because they do anything for their bosses,” leading psychiatrist in the field of psychopathy, Professor Neil Jenkins, revealed on Thursday.