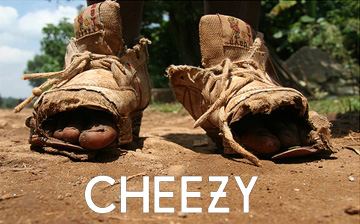 “I like watching cripples amble along dragging their feet whilst wearing rags you can easily find in Ethiopia. Jeez, if I want poverty I’ll go to India or Sudan, or some other godforsaken third world dung hole,” fashion critic, Monique Belucci told CNN.

Kanye West who is currently in huge amounts of financial debt is trying to pay off some of his creditors by selling rags to rich people, but is it working?

No, is the simple answer. The overpriced rags and bland clothes are not only ugly but can be knocked up by anyone by ripping a few pieces of cloth and wildly stitching them together.

“One has to look at the economics of this all. West is obviously not a business man. Here is a guy trying to recoup some money and pay off his vast debts by holding expensive fashion shows that put him in more debt. It just does not make any logical sense. I suppose with someone who has a registered IQ of 45, this is normal,” West’s belaboured accountant, who has not been paid for six months, revealed.

When asked for a comment on Thursday, Kanye grimaced, turned and sashayed flamboyantly back to his chair mumbling about cross stitching and hem lines.