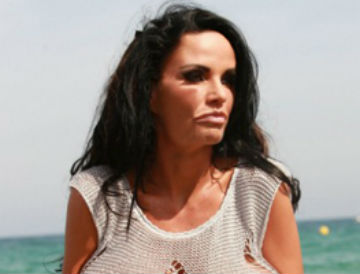 It was like something out of a psychedelic Burberry wet dream gone wrong. Package holiday tourists and the local Spanish people were astounded when from the sea came the famous celebrity, Katie Price, aka Jordan.

“I wa’ jus’ puttin’ my third fookin’ hanky on me bonce and downin’ me twentieth sangria when out of the fookin’ sea came Jordan. She just popped out of the surf and everyone went wild takin’ photos of her and all. It was fookin’ wicked mate,” Lee Carver from Essex told the Sun newspaper.

According to the Spanish coastguards Jordan was reported missing from a yacht yesterday where she was modelling for her latest dirt mag shoot.

“Luckily Mrs Price managed to stay afloat for the 17 hours because of her breast implants acting as a flotation device. She was in good spirits when she washed up on the beach and even managed to sign a few autographs for the assembled crowds who came to see her,” Oswaldo Dominguez, head coastguard told Reuters. 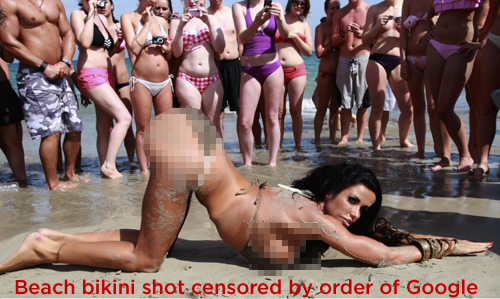 In true Jordan style, only moments after washing up on the crowded beach after 17 hours in the sea, she got down on all fours pouting with her trout-lipped orange tan and struck a pose.

“Katie’s a real professional, I have to take my hat off to her dedication to being cheap and tacky. We’re glad we eventually found her after she fell into the sea. We have been tearing our hair out at the very thought of losing such an asset to British culture,” her agent told the Sun.