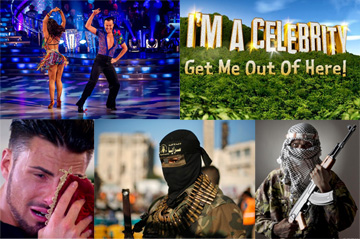 Bread and circuses, is that it? When times are shitty they give us Strictly or put some non-entities into a jungle or they bring out block head Cowell to exploit mentally ill teenagers who want to be the next big ‘fing’.

Why is it that whenever there’s some sort of war on in the Middle East or terror alerts, they put this mindless crap on TV? If you posit the argument that it is pure escapism, that is wrong, because escapism should be enjoyable and not torture.

How is this entertainment? Watching some narcissistic Strictly poseur prancing around a stage in a camp manner and enduring the indignity of being graded like some Crufts poodle? At what level of ‘entertainment’ does one acquire a revolver from a dodgy bloke in a pub and put it against their own cranium.

But what else is there to watch on the telly these days? Switch the fucking channel and get a bunch of z-listers in a jungle being forced to eat spiders and shit into buckets. How low do the celebuturds want to go? It seems so low that all self respect, dignity or decorum are completely amiss.

Switch the channel and get X-factor or whatever it’s called. Simon Cowell comes on with his circus of inequity, the banal talentless pieces of detritus not fit for any purpose but a one way trip to a glue factory are judged by equally talentless money-grabbing suckers of satan’s cock.

This, ladies and gentleman is not entertainment, it is torture, it is crud of the highest order, puerile pestilence and you the audience lap it up because you have no idea about quality of entertainment. Is that it? Why on earth would an audience favour this shit, when it would be preferable to be tortured by a thousand cuts by some Chinese chap from the 19th century?

Conclusion: The audience is to blame purely on the basis that they watch this crap.