What with dangling babies from hotel rooms and his penchant for pyjama parties with pre-pubescent young boys, you may not think that Michael Jackson is one for writing a book about the art of rearing children. But with the help of a Saudi Prince he has just been published and can now pay off some of his debts.

Michael Jackson’s new book: “The In’s and Out’s of Child Rearing” will be released on March the 3rd.

The multi-million dollar advance he will receive from his Saudi backers will hopefully be able to save his beloved Neverland ranch from the creditors.

Prince Al-Waleed Bin Abdul Sultan Bandar III also has good faith that the $25 million advance he has given to Michael Jackson will reap good profits from worldwide sales of Jackson’s new book. The Saudi Prince sympathises with Jackson’s plight and has even let the pop star stay near his camel racing stables in Jeddah where the stable boys and youthful jockeys fawn over the star. 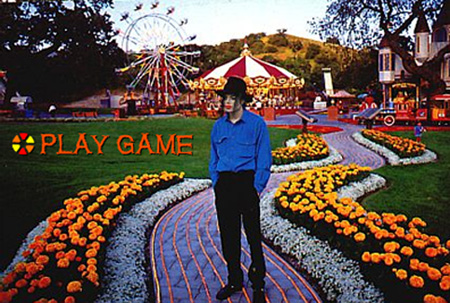 The new book will reveal to the world how Michael likes to rear children and how he uses a hands-on approach. Jackson also reveals the first words his child said to him: “Which one’s mummy?” and then “Aaaaaargh!”

Even though Jackson refinanced his $300 million loan from Fortress Investments with help from Sony Music, HSBC and Barclays Bank, his Neverland ranch was not part of the deal and was still under threat.

For Jackson, the fear of losing the ranch that brought him such wonderful memories was a source of great anguish.

Memories like when he blew his first nose and the time he got so drunk on Jesus Juice he ended up staying Home Alone with Macaulay Culkin.

“The In’s and Out’s of Child Rearing” by Michael Jackson will be available through Al Saud Publishing on 3rd March.

Remember When the Earth Was So Fresh and New

Magnificent Meghan Markle Gets Ready For Pregnancy in Home Gym

End of Lockdown is the Refuelling Time For Virus