There is horrific news that Los Angeles and subsequently the whole of America was lost yesterday. People were on the streets bemused, silent and lost. How could this happen? There was no fight, there was no defence.

The people of Los Angeles have surrendered without a single shot being fired.

A once great city now reduced to a gaudy cheap trailer park of nouveau riche tackiness.

Last night it emerged they planned their entrance after watching film of Hitler’s triumphant Paris arrival in
1940. A source close to the Beckhams said: “Victoria and David know they’re the biggest thing to hit America since processed cheese.

“They saw footage of Hitler entering Paris then and wanted their entrance to emulate that.”

1940 was the terrible year when Hitler strode into Paris uncontested. The French surrendered without a single shot being fired.

This time, the Americans are the ‘surrender monkeys’ with the Sieg Beckhams taking Los Angeles without a fight. 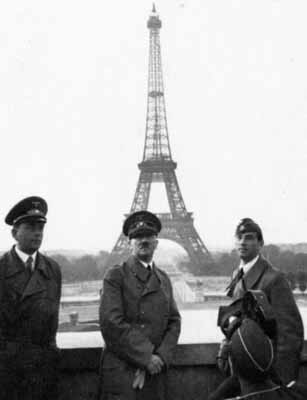 Adolf Hitler in Paris June 23 1940
Several countries around the world successfully resisted the assaults over the years from the crass bling merchants but America after sustained attack was lost. Spain was also lost but was recently liberated after many years of struggle and civil war resulting in the loss of millions of souls to the deadly Beckham advertising machine. 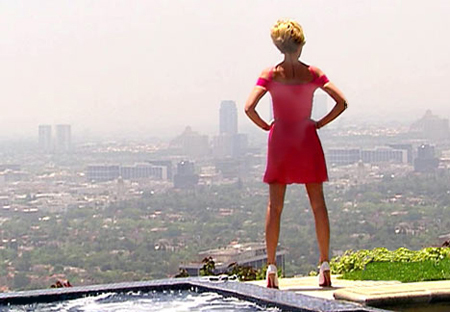 Victoria Beckham who looks like an unsmiling simian poshtitute fascista, wore some very expensive clothes as she saluted her new followers whilst snorting her upturned nose in the LAX airport entrance hall.

The trembling boys voice of David Beckham addressed the crowd with an appreciative tone, he then followed his wife to the bling-mobile which with gold plated door handles and diamond encrusted window switches would make the most gaudy and crass rapper blush.

They were then driven to their LA blingquarters where the command operation will begin in earnest.