The tiny star who only stands at 2.4 ft met the tallest man in the world Bao Xishun (7.9 ft) at his Minneapolis complex Paisley Park today.

The extraordinary musical maestro who can play twenty instruments also took the time to release his latest album “Planet Earth”.

Famous for his maverick ways, Prince released his new album utilising the Mail on Sunday as a distribution vehicle.

Record companies which have leached off artists for so long as the middlemen, were left with egg on their face as Sony BMG UK was forced to shelve its own release of the record.

Prince makes the majority of his income from performing shows in his syndicated travel troupe who have toured the world many times.

The purple one wowed crowds at a Minneapolis store on Thursday when he jumped out of a hat which was placed on the table by his bodyguard and sang a rendition of “Raspberry Beret”. 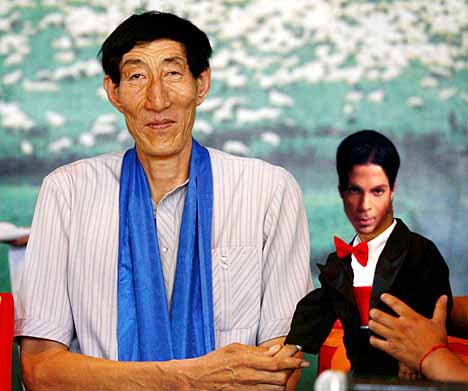 The world’s tallest man has now famously met the worlds most musical and he did a cute jig on the table for the expectant crowd wearing a little suit and a bow tie.

Unfortunately, the artist formerly known as TAFKAP seems to have bypassed his funk roots for the very bland generic sounds of RnB on this new album.

The Daily Squib’s music correspondent, Gordon Lightfoot, has given this one a firm thumbs down because it is not only bland but has no sex or danger with only one song having any guitar in it.

Since he has been hanging around with that boring old Jehova’s fart Larry Graham, Prince’s music has lost all its danger and creativity but the ‘lil boy’ sure can jig.

THE SQUIB WILL BE GIVING AWAY 10 FREE TICKETS TO SEE THE PRINCE TRAVELING CIRCUS TROUPE AT A LOCATION NEAR YOU. JUST EMAIL WHAT YOU THINK ABOUT THE NEW ALBUM TO [email protected]