The US created Al Qaeda operations arm is waiting on another US attack. The staged attack of 911 was not enough to bring the civilian population up to war footing and the mass worldwide sympathy for the US was squandered by George W Bush’s incompetence as a leader and the failed invasion of Iraq.

Al Qaeda was created by the CIA in Afghanistan during the Soviet invasion.

George W Bush needs another saviour for his shortcomings, another terrorist attack to prove him right for his ‘lame’ policies. September 11th was the Pearl Harbour that the US needed to bolster its civilians into a false patriotic frenzy albeit only briefly.

Last month, the new chairman of the Arkansas Republican Party, Dennis Milligan, said, “At the end of the day, I believe fully the president is doing the right thing, and I think all we need is some attacks on American soil like we had on [Sept. 11, 2001].”  Milligan told the Arkansas Democrat-Gazette, “And the naysayers will come around very quickly to appreciate not only the commitment for President Bush, but the sacrifice that has been made by men and women to protect this country,” he concluded.

“After 911 happened we could have declared war on Europe and the people would’ve agreed. It was a wonderful slick operation and we benefited 110%. The arabs and so-called ‘jihadists’ who supposedly carried that one off have not benefited from any of this…we have. ‘Cui Bono’ as they say,” John McGregor a Pentagon operative exclaims from his office. His frankness is frankly quite refreshing in a climate of pure lies.

Dick Cheney of course is a master of lies and has been pulling the wool over many Americans eyes for a very long time. His reign of deception will abruptly come to an end when the next government is brought in next year, they may have to shoe horn him out of his post though. The reluctant exit of a war criminal who is responsible for hundreds of thousands of civilian deaths will be given a medal for his services to the USA and not tried as a war criminal as he truly deserves. No one said that there is any justice in American society or law for that matter and the Bush regime has shown this premise to be true more so than any other regime in US history. To be above all law and act as a dictator is something the US constitution was totally against, unfortunately this edict was bypassed and superseded to be discarded in the dustbin of history. The ultimate rejection of the United States constitution, the defacing of the American flag, the betrayal of the American people, the senseless murder of thousands of humans for oil profit, the sacrifice of American troops for greed and corporate profits. 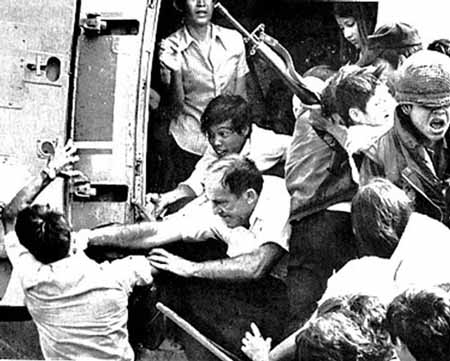 Thus, one must understand the motives of such nefarious misdemeanours, of cronyism on such a grand scale that it leaves one astounded at the blatant nature of it all. What can come of a President who will be named in history as the one who caused the biggest disaster in foreign policy ever for the USA? The middle east region is now so destabilised that the US greed operation may have precipitated the advent of a bigger war…the final war where a fight to acquire the last remaining worlds resources will lead to no one gaining them…only total annihilation will be achieved. 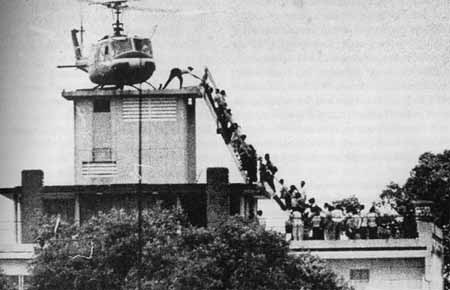 The evacuation of Saigon, Vietnam, soon to be repeated in Iraq and Afghanistan

It would take two years to pull troops out of Iraq because of the huge war machine that is entrenched there. The permanent US bases which are built solidly into the Iraqi soil are as mentioned earlier…permanent. If the Americans were to exit and leave their equipment behind the evacuation would still take a year. Therefore, it is plain to see that all the talk about the US leaving any time soon is useless unless there is a forced and hurried evacuation.

US Intervention in Vietnam caused the unnecessary death of millions of innocent Vietnamese people, the same thing is happening in Iraq now.

So, it is with the terrible prediction that George W Bush and his treasonous cronies will have the last laugh on the American people by either engineering another attack or allowing another attack to happen. This will solidify their awful position and foothold on a crumbling economic debt ridden facade that is now called the United States of America.

Why Christians Should Be Banned From Entering the U.S.

Joe Biden Says He is “Glad to Visit Croatia”