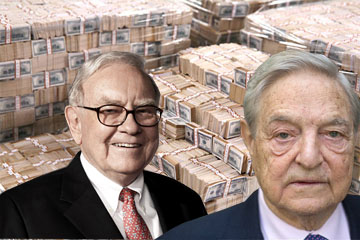 First of all to invest like Soros or Buffett, you must have a minimum of $500 billion in your account. If you do not have that amount of money, then you can’t achieve the investment targets required.

“When you have a near unlimited margin, you can pretty much buy or sell anywhere on the chart as long as your team of highly paid chartists and researchers think it’s okay. Entry points are not a problem when you can stay in a trade for ten years without even breaking a sweat through all the noise. Warren Buffett says buy and hold, yes, but only if you can afford it. George Soros says buy in a bubble, yes only if you can afford it. In other words, to make billions, one must first start off with billions, anything less is doomed to failure. Remember, the fundamental point about the big boys is that they do not think about money. If you have to think about money, then you lose, that’s the difference between them and the majority,” Donald Franken, an investment banker at Banque de Societal told the Financial Times.

2) Employ the best researchers and programmers

5) Give some money to good causes, be seen as a philanthropist

6) Have a direct line to the dark side for that special insider info..shhh