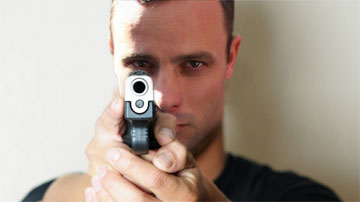 Reeva Steenkamp wanted to leave live wire Pistorius, and he knew that. She called him stumpy, and made him out to be half a man, he lost his temper and shot her when she was taking refuge in the toilet.

People like Pistorius are very driven people, nothing gets in the way of their success, and when Reeva threatened Pistorius’ extreme focus — where he never loses — he snapped.

One must clearly analyse the state of mind of Pistorius, he is a paranoid control freak athlete, and he likes to shoot. When he saw red, he knew the repercussions but thought his story about intruders would make him sail through any court case.

During the trial, Pistorius engaged in a theatrical show to the judge to show remorse for his crime. The more remorse he shows, he hopes the audience will look upon him with favour. He has even employed the prop of a simple bucket to vomit into, this may gain even further sympathy from the judge.

No doubt many men have to put up with the devilish tongue of some women, and what Reeva said to him that night sealed her fate. Most men just eat it up, but Pistorius snapped, and he had a gun.

Who was more stupid? Reeva and her deadly unravelled tongue, or the juvenile uncontrollable actions of a big kid with a gun only used to getting everything his way all the time?

Beyond doubt, Pistorius is guilty of a murder of passion, whether the starry eyed judge (no juries in South Africa since 1969, please see comment below, our writer got a severe rap on the knuckles for that one – Ed.) is allowed to come to that conclusion is another matter, for when it comes to justice there are two types, justice for the famous, and justice for the rest.

This time, justice will come as a shock to Pistorius as he is taken away in a van to a secure prison for a long time.