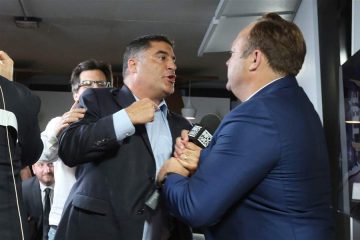 On the left were the Young Turks, and on the right Alex Jones.

These two so-called media establishments are American staples in low quality trigger politics, and in Alex Jones’ case conspiracy provocation. Americans thrive on the lowest common denominator of shouting the news. For a population of predominantly low IQ idiots, this is the height of intelligent discourse.

The well orchestrated attack by the Infowars Jones team was captured on camera and is thoroughly entertaining.

In tow were the ladies, on the left Ana Kasparian wearing a red dress, and Infowars favourite Lee Ann Mcadoo. To see them hurling insults at each other certainly added a sensation in the underpants, especially with the sexy Ana and Lee Ann. One would have wished for them to suddenly jump at each other and tear their clothes off in wild abandon. Unfortunately, that never happened.

There were no punches thrown although at one point it looked close.

Fighting over ratings and viewership is a staple pastime amongst these two rivals, and it is a pity they do not put more time into improving the quality of their shows.

Infowars is basically a lowly news aggregator much like the thieving Drudge Report, and the Young Turks is an opinion based aggregator where they comment on any given story mostly garnering YT hits from sex related stories. None of them create their own work. None of them are creative individuals but are senseless egotistical American banal thugs peddling other peoples work and making it their own in a shouty lowly way.

When I say thugs, I mean these people are uncouth thieves of other peoples reportage. They take and do not give. Granted they make a very good living out of what they do, because the American people have no standards when it comes to media and accept any old detritus.

Sell enough shit, and people eventually like shit. They do not know the difference.

Well, the thuggery worked, they got people talking about them, and their ratings may have another boost, and their advertisers will like that.