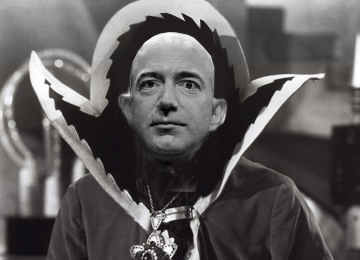 Casting for the remake of Flash Gordon was easy according to the director.

“It took me three minutes to make the decision to cast Jeff Bezos as chief villain. We needed someone who was truly merciless, like beyond sociopathic, no soul, just crunches data and feeds employees through a meat grinder. This guy, he looks the part too, I gave him a call, he had just fired a woman who lost her whole family in a car crash and was recovering from breast cancer. His ruthless nature left her in the streets homeless, but he laughed at her and threw her an Amazon voucher. Now that’s what I was looking for,” Drew Bastard, the director told Film magazine.

Not content with pilfering the profits of publishers and authors, Bezos is keen to make it in the movies as a sideline.

“People think I’m just a cold hearted number cruncher who only thinks of profit and treats employees like robots. That’s right, and I’m damn proud of it,” Jeff Bezos revealed whilst administering another mass firing session for employees who had lagged by 0.06% in a month.