Factories supplying Sir Philip Green, who is based in Monaco and is worth nearly £5 billion, employ hundreds of Sri Lankan, Indian and Bangladeshi workers in Mauritius where they labour for up to 22 hours a day, six days a week.

Workers told The Daily Squib that they were conned in their home countries by ‘self-employed’ con men employed by Green who promised wages up to five times what they receive. They pay up to £725 to get the job, equivalent to seven months’ earnings.

Once in Mauritius they receive as little as 22p to 40p an hour, about 40% below the local average wage.

Mr Green made sure to add that he would increase pay by 3 pence to every sweat shop workers wages as well as have the ankle chains on workers removed. Further plans are being made to reduce working hours by half an hour and allow workers to drink one cup of water whilst working 22 hour shifts in the 100 degree heat. 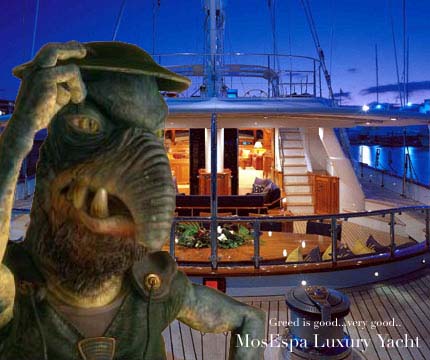 He told a reporter last week that he was having a marvellous time on his £300 million yacht off the coast of Turkey.

“My luxury yacht uses up £60,000 worth of fuel per mile so I need to run the damn thing, don’t you think? The workers are the ones who are the machinary behind my wonderful yacht. As a gesture, I have made provisions for them to be rewarded by 3 pence each. Who says I am not a generous guy?”

Kate Moss, who has also profited off the slave trade, is to visit Green next week to plan for another factory opening in Bangladesh.

Next year is set to be another very profitable tax-free year for the Greens and Moss’.