The locals at the Mediterranean resort look on in disgust as another flock of English reprobates and thugs who have secured their holiday in Magaluf for the princely sum of £40 for two weeks of booze and vomit tuck into their chips and sausage meal.

Another obese red British man burps into his full English breakfast and takes another swig from a huge glass of cheap beer, his fifth this morning and all before 9.30.

It looks like a bargain – a cheap flight to the sun. But for thousands it is a one-way ticket to cancer.

The boom in cheap air travel is not only harming the environment but also the health of the millions who fly in search of sun, cheap sex and cheap alcohol. 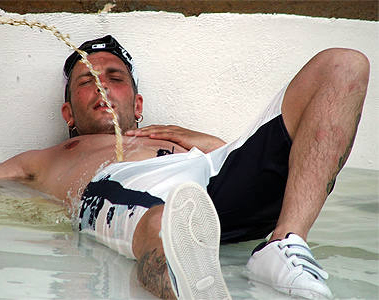 A drunk English holidaymaker is urinated on by his mates

Exposing large areas of pallid flesh to the midday sun is the surest way of triggering the lethal form of skin cancer known as malignant melanoma.

By midday the lobsters are heaped up five to the dozen on soiled condom ridden beaches, a distinct smell of frying fat and stale beer wafts over the nasal palate as the bloated English bathers turn over for the other side to bake.

The English penchant for winter ‘fake sunbed’ tans of orange have been supplanted with that of a napalm burn victim from Vietnam, and yet they still come in their flocks year after year.

More of them are doing it than ever before. Melanoma is the fastest-rising cancer, up by 43 per cent in a decade, according to by Cancer Research UK. In younger people, aged 25 to 44, the rise is even higher, up 65 per cent between 1995 and 2004.

The rise mirrors that in foreign travel, up by 48 per cent between 1997 and 2006 according to the Association of British Travel Agents, with 68 million trips abroad taken last year compared with 46 million in 1997.

Although there is a time lag between exposure to the sun and development of cancer of between eight and 30 years, experts said yesterday that foreign travel was a key factor behind the increase in the cancer, and the boom in cheap flights is certain to see it rise further.

Jane Birkin, director of health information at Cancer Research UK, said: “I do think cheap air travel is a factor behind the increase. The British tend to throw caution to the wind when abroad and, desperate to get a tan, take more risks in the sun. The increase in foreign holidays has been an important cause of the rise in melanoma.”

The sharp rise in younger people with the cancer was a legacy of sunburn contracted during their childhood and adolescence, when the skin is more vulnerable. Sunburn, rather than gentle tanning, carries the highest risk of causing cancer. 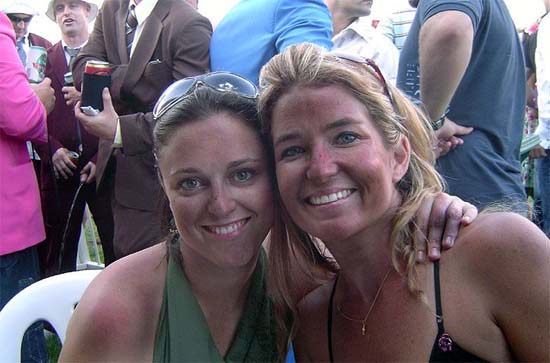 “The younger you are the worse it is. Younger skin is more susceptible to damage. As we age, the skin toughens up and is better protected,” she said. “It is possible to get a little bit of colour and be safe in the sun. It is those reddening and burning episodes that every time increase the risk of cancer. They damage the DNA which the body tries to repair but every time there is more chance of more damage. The more hits you get the greater the risk. Those who behaved badly on holiday in their teens [by not covering up or applying sun cream] are now seeing the effect in their forties.”

Melanoma used to be a disease of affluence, found most commonly among those who could afford to take foreign holidays. But since the boom in package holidays which began in the 1960s and the arrival of cheap flights in the 1990s, the population affected by the disease has changed.

Dr Birkin said: “There is anecdotal evidence from dermatologists that it is affecting less affluent groups – I have heard consultants comment on it.”

Other sharply rising cancers in the past decade include womb cancer, up 21 per cent, and kidney cancer, up 14 per cent. Both are commoner in overweight and obese people and the rises are thought to be driven by expanding waistlines.

Joe Biden Says He is “Glad to Visit Croatia”