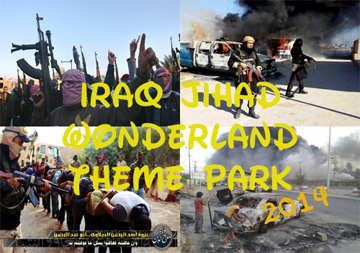 The theme park concept was created by American company, Pentagon Entertainment Inc. and will feature many attractions for visitors.

“When you fly into Baghdad, the fun starts right there. Your plane can either be hijacked or the wings shot up. You will be greeted by black acrid smoke from burning oil wells and scenes reminiscent of the apocalypse. Horror fans will witness all manner of atrocities, and if you have VIP tickets you can even be part of the action too,” Brad Zweisher, operations director of the Iraq Jihad theme park told CNN.

The Iraq Jihad Wonderland theme park stretches thousands of miles even into neighbouring Syria so theme park revellers will not be pushed for choice of entertainment.

Budd Neuberger, 45, a salesman from Detroit bought one of the first tickets last week and is keen to go to Iraq for a once in a lifetime trip.

“I can’t wait. As soon as we land we’re in the theme park. I’m ready for a ride of a lifetime. I’m not sure what the man said when he mentioned that it was a one way trip, but as long as I have fun, who cares? I got my blind fold ready.”