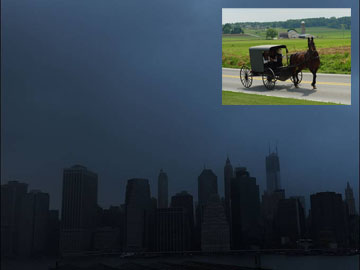 As Obama foolishly baits the bear with sanctions, confiscations of wealth and other sundries, he’s only causing more damage and chaos to America.

“All Russia has to do is stop all uranium deliveries to America. That’s it, lights out, finished. Russia is the main controller of uranium and rare earth metals, which are crucial to running America’s power stations. Over night, literally the majority of the country would be plunged into darkness, electricity prices would sky rocket. Imagine being in a hospital about to undergo a life saving operation when all the lights go out,. People just don’t realise that what Obama is doing is playing with fire,” Herb Winters, a strategic expert told news outlets, Monday.

Looks like the Amish were right all along. This could be a good thing for Americans, because the Amish are masters of living within their means, unlike the rest of the population.

The other positive side of rolling blackouts is that Obama’s global warming agenda may be finally realised as Americans will not be using as much power any more — if at all.