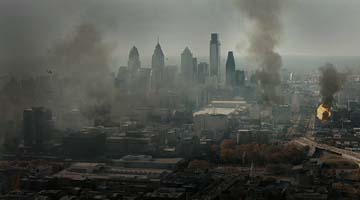 “As the forces of Russia build up in Crimea, something has got Putin’s goat, he knows something about the U.S. and what he knows he may have garnered from the Snowden files.

“Who knows what piece of information Putin is acting on, as those NSA files distributed by Edward Snowden were certainly detailed — that is the files that have been released for public consumption.

“What we do know is that the West has been spying on people, but this is not news to many, they have been doing it for centuries, as has the rest of the world, everyone is spying on everyone. These days however, the spying is more thorough as we live in a digital age where information can be appropriated in higher volumes and with increased depth and detail.

“David Cameron has unfortunately weakened the British army, as Obama has weakened the U.S. army, so who is to stand against the mighty bear Russia?

“All this talk about the UK/US economy rising and rising, seems like a red herring for those in the know. All it will take to strike fear into the economists is a well placed chess piece from the Russians. Chess is something Putin knows about, and Obama has been shown to be a rank amateur when it comes to geopolitical or military strategy, he is a talking illusion, all marketing and no substance, without his special advisers and teleprompter he amounts to a walking vacation. Cameron himself, is almost invisible, it is sometimes hard to believe he is actually there when he rarely appears on the screens, he is well versed in brown nosing though. No doubt military strategists are daily whispering in their ears about certain points of interest, but against the might of Russia and China, who is to say what can happen? Economic sanctions from the weakened West  serve no purpose but are tools to make events spiral further out of control, as Russia would have no option but to strike other targets decisively.

“The Russkie bear is being baited, it has been roused from hibernation, and if it sniffs fear and danger, its claws strike downwards tearing large chunks of flesh from its victim. A possible set up in a much larger game, maybe, but dangerous and foreboding all the same.

“The downward strike may equally create a wound on the supposed resurging economies of the West as the bull turns to bear, but any sane economist should know that the markets have been rising on artificial air, there is no real economic pulse, no jobs, and no real green shoots, in reality, we never recovered from 2008, and the same ways of operating in the financial markets are all too prevalent. If the markets were to fall by 90% in the space of two or three days, people would be left with nothing. Hyperinflation would set in, the supermarkets would have empty shelves, and all commodities would be out of reach for millions. Pensions would be rendered worthless, bank accounts would be frozen and the over inflated house prices would not amount to much when no one would be thinking in their wildest dreams of buying a house, first buy me and my family a meal. In America, the citizens are currently allowed to defend themselves with firearms, but in the U.K. citizens have been disarmed that is apart from the criminals. Lest we forget Obama’s ‘care’, something that was a smokescreen, a costly piddle in the dark that was never meant to materialise, and is a dead duck in the tepid waters of a doomed fiat currency. Try pay for your Obamacare when you have no food.

“This is why it is in the best interests for the West to let Putin take Ukraine, as he allowed the U.S. and U.K. to take Iraq, Libya, Tunisia, Egypt and Afghanistan for their natural resources/strategic positions. The West tried to take Syria with a full blown invasion in August 2013 but were thwarted by Labour’s Ed Miliband in parliament when he vetoed the vote to go to war. Because of him, Obama called off the invasion, and now the mess is even worse than it was then. Maybe Miliband is part of the plan, we will never know, but his actions alone enabled Russia to invade the Ukraine in March 2014.”