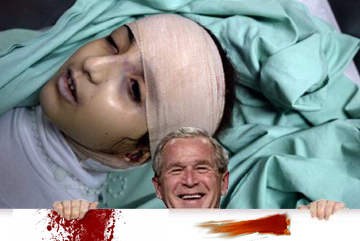 Former US president George W. Bush has spoken out against the Russian invasion of Ukraine: “Vladimir Putin has invaded a strategic oil and gas pipeline nation because he says his people were in danger. Yeah, but where are the WMDs? At least I had a better excuse, huh.”

Mr Bush is currently working on a new series of paintings depicting Iraqi babies that were born deformed from depleted uranium.

“I like to remember my legacy. Because of me over a million humans lost their lives and millions more were displaced. Iraq is a free land now where everyone is safe in the knowledge that they could get shot or blown up at any time,” the former president said from his studio.