“What takes fifty years in the political and diplomatic field can be achieved in less than five years of war. This is the true effectiveness of a good world war. One can see the effective implementation of global unity post world war two with the United Nations and NATO. The coming next war will create a truly global system ruled by one source. War also serves a very important purpose and that is to reduce populations as well as increase the effectiveness of military equipment. In peace time the military is constrained by budget cuts and inactivity, whereas in war, technology is speeded up to find new military weapons. There is an urgency in war that is unrivalled to peace time.

“To affect global change in their favour, one must also understand that wars are funded by one entity. In World War two the American bankers funded Germany as much as they did the Allies. This form of global financing is an important factor in globalisation. Of course, the populations do suffer heavy losses in global wars but amongst the elite financiers they are an accepted collateral loss for an altogether larger gain. In addition to chaos and mayhem, war creates great fear, this is what the elite controllers love the most as they feed off the collective fear of the masses and utilise that emotion to steer the herd towards the objective they choose.

In closing statements on the brief paper, there are references to past global wars and their effective conclusions in re-engineering global politics and society as a whole and bringing a New World Order. 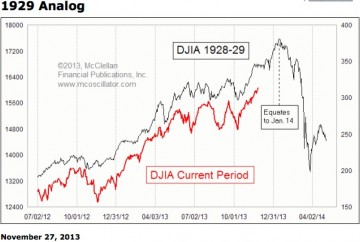 “Some historians are already claiming that the time we are living in right now is very similar to the build up of World War One, and there may be some correlation to this theory, although the present time is possibly mirroring the build up to World War Two more than the previous example. Billionaires are already dumping their stocks as we speak as they have an eye on the future and know their history very well. All ages move in a cyclical fashion, and if one studies history one will see that over the centuries there have been many cyclical events, as history repeats itself time and time again. One also must understand the fundamentals of biology to comprehend that humans have not changed their biological constitution and are still the same after thousands of years. It therefore does not matter how supposedly civilised the modern man may think he is, he is still as racist, greedy, violent, religious, bigoted, nationalistic and flawed as man thousands of years ago.

“The next war will therefore have to be an effective efficient mechanism to eradicate human conflict once and for all. Possibly by introducing mechanised weapons, to eradicate the many forms of human vice. It is possible that those who survive will be interred into a scientific technical society, where all hatred, war and previously violent human behaviour will be purged under a strict controlled population. Bio-mechanical implantation, transhumanism, sentient artificial intelligence and nano technology will dictate an altogether different experience to the previous chaotic messy overcrowded human condition responsible for much pain and heartache.”